Earlier today, the President met in the White House with a man dressed like a pirate and took time to tweet about it.

Yes, it’s "Talk Like a Pirate Day" which the Preezy of the United Steezy noticed more than the fact that we’re under attack in 20 countries around the world. Oh, and our four Americans in Libya are still dead. 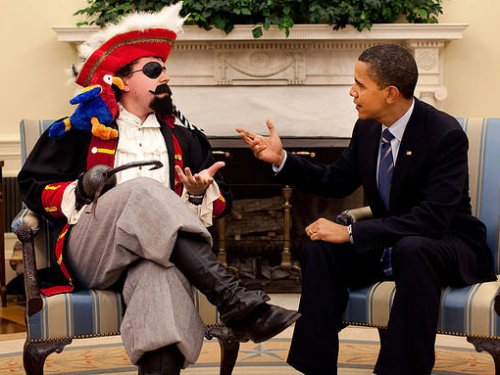 This followed an appearance on The Letterman Show: 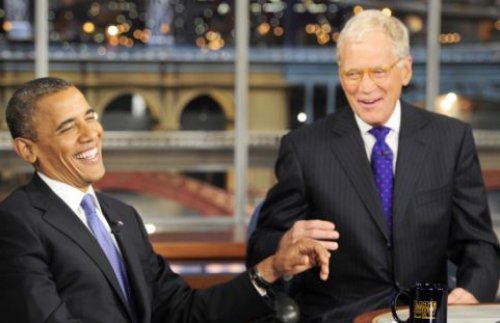 ...President Barack Obama attended a fundraiser at Jay-Z's 40/40 Club in Manhattan that featured a champagne tower of 350 bottles worth $105,000 - more than twice the median household income of an American family... The tower of $300-a-bottle Armand de Brignac Brut Gold, known as 'Ace of Spades' because of its label, is a permanent fixture at the club. 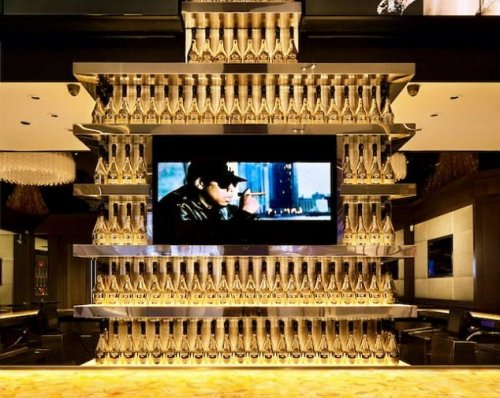 'It’s floor-to-ceiling gold bottles in the entire space,' a 40/40 representative told the New York Post. 'It’s beautiful—breathtaking. It’s the first thing you see when you walk in.' 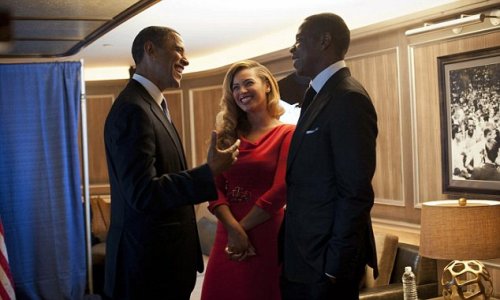 ...He then compared himself to Jay-Z. 'Jay-Z now knows what my life is like. We both have daughters, and our wives are more popular than we are. So we’ve got a little bond there. It’s hard, but it’s okay.'

Jay-Z is quite the role-model for America's youth, what with his romantic classics "F*** All Nite", N****, I'll throw a Molotov cocktail through your momma's momma's house", South Philly motherf***ers kill at will" and I put the gun to ya, I let it sing you a song"

Oh, and who could forget "Is That Yo Bitch?"

Yes, that's precisely who kids should be seeing the president with. A true American hero.

Meanwhile, as America's embassies suffered 20 attacks and protests throughout the Middle East, the president has extended an invitation to meet Egypt's President Mohammed Morsi -- leader of the Muslim Brotherhood -- in New York.

The Brotherhood's credo was and is, "Allah is our objective; the Quran is our law, the Prophet is our leader; Jihad is our way; and death for the sake of Allah is the highest of our aspirations." Its most famous slogan, used worldwide, is "Islam is the solution."

The Muslim Brotherhood was closely intertwined with the Third Reich during World War II and many of its goals remain aligned: namely, slaughter Jews, Christians and other infidels wherever and whenever possible. Egypt's Jews were run out of the country decades ago and the Coptic Christians are fleeing the Brotherhood's Islamists now.

But in the midst of his busy schedule, President Obama explicitly refused a meeting with Israel's Prime Minister -- who also requested to meet in New York -- as Iran nears completion of its nukes.

For Obama, a pirate, Letterman, Jay-Z, Beyonce, and other fundraisers all receive much higher priority than daily intelligence briefings and the security needs of the nation and our allies.

Because Iran's nuclear weapons are certain to be handed off to its terrorist partners like Hezbollah and smuggled into the United States through the southern border Barack Obama has failed to seal.

It's called "taking down America". It's his goal and the goal of his evil regime. It is treason.

I am not going to comment...still PO'd about that 'Scandal Central' article from Lid....though the 47% should be sicked by this!!!