I admit it: the videotape probably ended his campaign

I refer, of course, to the most damaging taped admission by a president since the Nixon era.

“On all these [security] issues, but particularly missile defense, this can be solved, but it’s important for him to give me space,” Mr. Obama could be heard saying to Mr. Medvedev, according a reporter from ABC News, who was traveling with the president.

“Yeah, I understand,” Mr. Medvedev, the outgoing Russian president, said. “I understand your message about space. Space for you …” 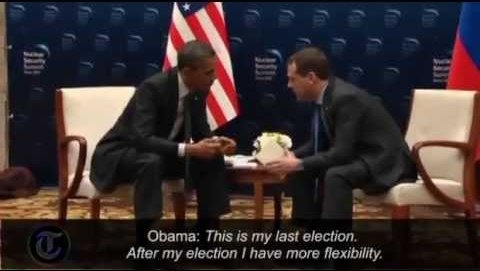 Mr. Obama then elaborated, in a portion of the exchange picked up by the cameras and reproduced by news agencies: “This is my last election. After my election I have more flexibility."

“I understand,” Mr. Medvedev said. “I will transmit this information to Vladimir,” he continued, referring to Vladimir V. Putin, who won another term as president in an election this month.

The most transparent administration ever is, as Jim Geraghty observed, sending "[o]ne message to the voters at home, an entirely different message to leaders abroad."

To recap: a resurgent Russian empire -- ruled by a nascent dictator -- has been America's foremost enemy since 1945. And we have a president, who is already hollowing out America's defenses, secretly negotiating with those dictators behind America's back.

That, my friends, is the most shocking video of this election season.

THE HOUSE SHOULD ISSUE A WARRANT FOR HIS ARREST.

HE SHOULD BE CONVICTED OF TREASON AND PUNISHED TO THE FULLEST EXTENT OF THE LAW..

Sadly, the media is more interested in Paul Ryan's track time to bother with anything so trivial as the the end of American freedom.

When the end comes, will anyone realize the blame lies with the media (and the 47%)? I doubt it.

How many signatures does it take to impeach the president. he he's obviously showed favortism towards a certain race (reverse discrimination) has spent billions of taxpayers money on third world countries and waste ( they should have him and his wife pay back every penny). He's most defenitly a comunist from when he allowed the individual agencies to tap our phones .