BUT THEY'LL DO BETTER WITH THE HEALTH CARE SYSTEM: Postal Service to File For Second Default in Two Months

But I'm sure they'll do a much better job with 16 percent of the entire economy, i.e., the country's health care system: 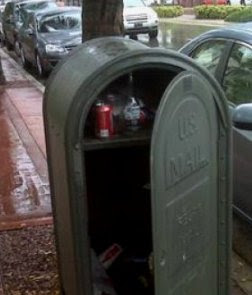 The U.S. Postal Service will default this week on a $5.6 billion congressionally mandated obligation to pre-fund retiree health benefits, marking the second time in two months the cash-strapped agency has done this.

The Postal Service last month failed to pay $5.5 billion for its fiscal 2011 prepayment obligation, which originally was due in September 2011 but was deferred by Congress until Aug. 1. That was the first time it ever defaulted on a payment to the Treasury Department. The $5.6 billion due this week, on Sept. 30, represents this fiscal year’s obligation.

Before this year, Congress helped USPS defer pre-funding payments required by a 2006 congressional mandate. Postal reform has challenged this Congress. Lawmakers warn that when they revisit the issue after the November election they likely won’t reach agreement on as major an overhaul as some deem necessary. USPS lost $5.2 billion in the third quarter of fiscal 2012, $2.1 billion more than during the same time period in 2011.

Let me get this straight. The federal government's recent track record, just off the top of my head, is as follows:

• Medicare is bankrupt and headed for collapse in just six or seven years.

• Social Security is bankrupt and headed for collapse in the next 18 years.

• Fannie Mae and Freddie Mac went bust in 2008, taking with it the entire housing sector.

• The Postal Service can't adjust to the digital age and is hemorrhaging cash like a giant version of Solyndra.

You have to have a serious mental disorder to believe that. Or be a hard-core Democrat. Not that I'm sure there's a difference at this point.

But... but... it's not their fault! They are filing because... they are required to maintain a specific (if small still) amount of cash in reserves to pay (some of the) promised retirement and health benefits of their workers! It's not their fault!