Exhibit A: why Colin Powell must be excommunicated from the GOP

I know that Powell likes to appear on the Sunday talk shows from time to time, marketing himself as a Republican or a demi-conservative. He's neither, as evidenced by his incoherent and bizarre endorsement of Barack Obama in 2008. 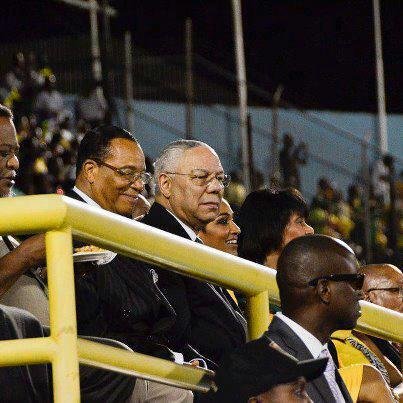 This picture -- found on Twitter during the London Olympics -- demonstrates just how outrageous a personality Colin Powell has become.

Socializing with the loathsome Louis Farrakhan?

Hard to believe some people really thought Powell would be the "mystery speaker" at the RNC and come out for Mitt.

Nope. Only a progressive like Bush could think Powell was ever a Republican.

Standing in front of Screwey Louie is one of his fruit loops.

Whom would you suggest perform the exorcism?

Pitch him out. Sure, I'm good with that. He is no conservative. He isn't really a Republican either come to think of it...

He hasn't changed. He's always been a loathsome traitor.

See who he is surrounded by? Sorry reason but blacks are voting for Obama cause he is black,so I will vote for the other guy who happens to be white.