After Nazis, don't you think crazed Mullahs are next best action movie villains? 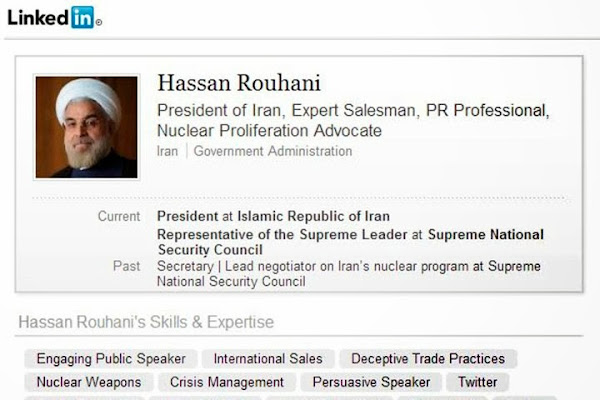 “I’m a career politician, expert public relations professional, leading international salesman and longtime advocate of nuclear proliferation,” the Rouhani page reads, under his smiling head shot... “Since my election as President of Iran in 2013, I developed and have executed an unprecedented PR campaign for the government of Iran,” it added.

“Through a series of statements, tweets, op-eds and smiles I have rebranded the human-rights suppressing, Ayatollah-led regime as moderate and a source of hope among the international community.”

...The page appeared Tuesday, hours before Rouhani was scheduled to make his first major international appearance in his inaugural address to the United Nations General Assembly.

Israel's Prime Minister will offer a rebuttal next week.

I just read through the entire article of yours and it was quite good. This is a great article thanks for sharing this informative information. I will visit your blog regularly for some latest post. Software for Insurance Brokers is key to our business. Our insurance broking management software SAIBA and reinsurance broking management software SARB has created a niche in insurance and reinsurance broking industry in India, Tanzania, Kenya, Uganda, Hong Kong, Mauritius, Bahrain, Oman, Qatar, Papua New Guinea and many more more countries in ASIA and Africa.Our software can streamline your operations, making your business more efficient, productive and profitable Our System is designed in a modular fashion which can be installed as a completely integrated system. This provides the flexibility of collaboration with existing legacy or third party systems.