You know how Alaskans have dozens of words for "snow"? We conservatives need a similar variety for "hypocrite"

I've heard that Alaskans have dozens of words that mean snow, from light frost to full-bore blizzard.

We need a similar level of variety for the word hypocrite, ranging from Holden Caulfield to Nancy Pelosi: 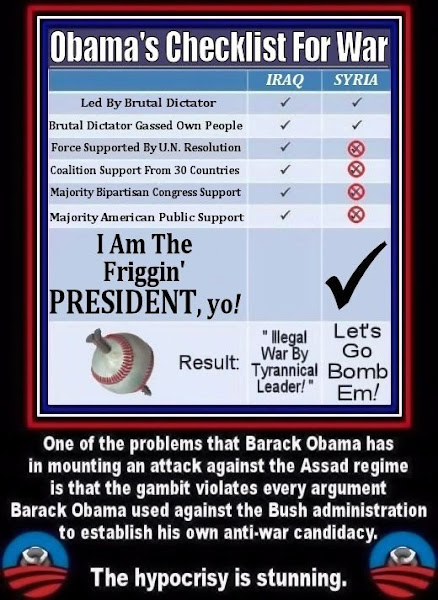 Instapundit's Glenn Reynolds reports that at Buzzfeed, memes were running 10-to-1 against Obama's rush to war. And notes one meme that Buzzfeed missed. 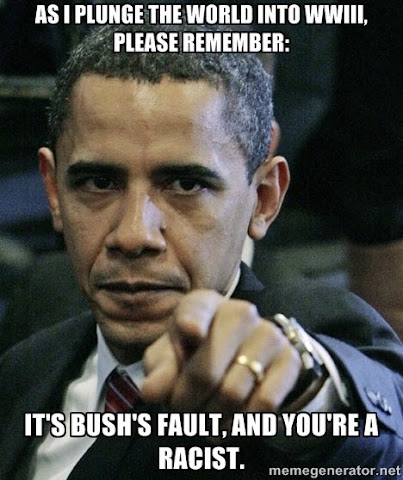 These Democrat and Republican establishment types are the lowest of the low.

Obama promises no boots on the ground. Hmmm, sounds like Libya.
Libya had weapons stockpiles, including shoulder fired surface to air missiles. Obama did not secure them.
Syria has hundreds of tons of chemical weapons. Kerry testified today we may need some special forces to secure some chemical weapons. Reality is that if Assad is killed or leaves, his generals and military flee for their lives. Then hundreds of tons of chemical weapons need to be secured. That will take a hundred thousand troops, not a few special forces surrounded by al Nusra, especially heaviliy armed al Nusra using modern weapons supplied by U.S. proxys.
Kerry says failure to punish Assad invites others to use chemical weapons. Really? Somehow we fought a real war with boots on the ground and regime change in Iraq because, in part, Saddam used chemical weapons. Did that deter Assad? If not, why will a limited strike on Syria deter others Mr. Kerry?
Finally, why is it in our national security interest to preserve Obama's vanity? We're told we have to punish Syria to keep Obama's
"red line" threat or the United States will not be credible and our allies cannot rely on us. Nonsense. The U.S. has credibility, Obama doesn't. And he didn't lose his credibility yesterday. Obama lied to the world about Benghazi. Why would anyone have any reason to believe him now? Is the gravity of the situation in Syria magically making Obama tell the truth where a direct attack against the United States wouldn't?