The apogee of Republican Failure Theater -- the act of pretending to oppose radical Left policies while secretly supporting them -- was the surrender of the Senate's treaty review rights with respect to Barack Obama's secret Iran nuclear agreement. This complete abdication of Congressional power was orchestrated by the usual suspects -- John Boehner and Mitch McConnell -- along with their henchman, Senator Bob Corker (R-TN). 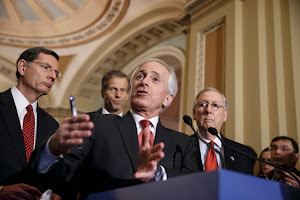 Iran is already in violation of the agreement. While their negotiators were busy in Munich Vienna, they were busting arms control sanctions in search of nuclear material and technology.

You can see that Corker and McConnell are already using their Obamacare playbook in service of the Iran nuclear deal. They are talking about how tough they are going to be and what they are going to do but, in fact, they will do nothing. They have colluded with Obama to create a deal that CANNOT be unraveled by a future president and it will happen without a majority vote of the Congress.

Well, it turns out that Obama screwed the GOP by hiding key elements of the "Give Iran Nuclear Weapons and Set the Middle East Afire" bill (my memory could be off, but I think that's the name of the legislation). In other words, Corker and McConnell were willing to get shafted consensually, but Obama took it to next level altogether. He went medieval on their asses.

President Obama won’t allow Congress to review two key aspects of the Iranian Nuclear deal, Republican lawmakers learned from international partners last week. Under the terms of the Joint Comprehensive Plan of Action (JCPOA), the International Atomic Energy Agency would negotiate separately with Iran about the inspection of a facility long-suspected of being used to research long-range ballistic missiles and nuclear weapons... The IAEA will also separately negotiate "how the IAEA and Iran will resolve outstanding issues on possible military dimensions of Iran’s nuclear program"...

Corker, who replaced Joe Biden as the nation's dumbest Senator, is completely outraged that Obama betrayed his hard-fought sellout of both the GOP and the nation.

Senators Bob Corker (R – Tenn.) and Ben Cardin (D – Md.), the two highest ranking members of the Senate Foreign Relations Committee, insisted to Energy Secretary Ernest Moniz in a meeting today that the Obama administration must turn over missing documents related to the nuclear deal agreed to with Iran, known as the Joint Comprehensive Plan of Action (JCPOA), that have not yet been transmitted to their committee, The Hill reported.

Foreign Relations Chairman Bob Corker (R-Tenn.) and ranking member Ben Cardin (D-Md.) huddled with Moniz to discuss “two documents that are not delivered to us that we’d like to have,” Corker said.

Those two documents were in addition to the formal Joint Comprehensive Plan of Action, annexes and related materials that the State Department sent lawmakers on Sunday, Corker said. The transmission of that plan started the clock on Congress’s 60-day window to review the deal and potentially vote to kill it. …

One of the documents pertained to Iran’s Parchin military complex, Corker said. The other related to “a side agreement that Iran has with the IAEA [International Atomic Energy Agency].”

Congress was supposed to receive the complete text of the JCPOA and documents related to the deal from the administration earlier this week, as it begins sixty days of deliberations on the merits of the deal. The debate period was mandated by the Corker-Menendez bill, which overwhelmingly passed both houses of Congress in May.

Corker and Cardin criticized President Obama last week, writing in an open letter to him that his decision to submit the JCPOA to the United Nations Security Council before Congress voted on it “would be contrary to your statement that ‘it’s important for the American people and Congress to get a full opportunity to review this deal…our national security policies are stronger and more effective when they are subject to the scrutiny and transparency that democracy demands.’” Historian Walter Russell Mead wrote that going to the Security Council first was “essentially abrogatin the treaty power of Congress.”

In April, a poll found that sixty-five percent of Americans supported Congressional review of the nuclear deal.

Hollywood needs to make another sequel to Dumb and Dumber and call it Dumbest and Dumbester, which is the perfect description of pathetic goofs like McConnell and Corker.

Doug, 66 Senators co-sponsored this bill instead of fighting to uphold the constitutional power of the Senate to approve treaties. WTF! This was not stupidity, this was intentional. Senate Democrats and Republicans voted for this surrender of constitutional power. Some of them; Paul, Cruz, Graham and Rubio are running for President. When it came to a vote in the Senate, only Sen.Pat Roberts voted against it on constitutional grounds.
Corker, Boner and McConnell are NOT the only problems.
Americans have been CONTINUALLY betrayed by their own government. Please tell me how voting will overthrow the oligarchy?
You are right though, it is all theater. Now they are pretending to be shocked and dismayed. We the Citizens, appear to be the stupid ones.

TRUMP FOR 2016.. these Washington Politicians now how their brains in their rear ends

Obama should jam his pen and phone up the assses of McConnell, Boehner and Corker .. What asssholes

All those that voted for the Corker bill violated their oath.