“You were given a choice between war and dishonor, Mr. Obama. You chose dishonor, and you will have war.”

The U.N. Security Council endorsed the nuclear deal Monday morning. The statists in the U.N. have been given the power to decide the fate of the nuclear deal with no intervention by the American people thanks to the unilateral president and the Corker bill. The Corker bill allows international law to supersede our Congress and our Constitution. 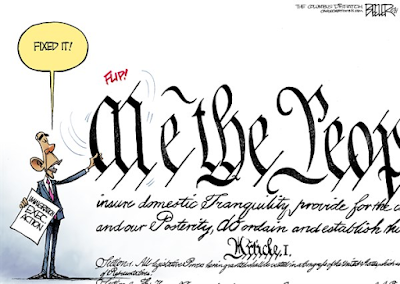 The negotiations of the P5+1 were always a sham because they were always between the U.S. and Iran. China and Russia? Russia wants the U.S. to be harassed by Iran and they want to sell arms to the Iranians. China is already preparing for war against the United States with cyber as the first front. The U.K., France, Germany depend on Russia for their oil.

The President told Congress he’d call the treaty an agreement and would circumvent the ratification process. Article VI of the Constitution requires Officials to take an oath to “support the Constitution of the United States against all enemies, foreign and domestic,” yet he chose to ignore the treaty powers of Congress.

Congress, with the help of John McCain and Lindsey Graham, came up with Corker bill which suspends the Senate’s treaty power and allows international law to take over.

Barack Obama went straight to the U.N. to allow them to vote on the treaty aka nuclear agreement with Iran before Congress votes. Originally, the Corker Amendment was supposed to stop this but it was an awful bill and had no redeeming qualities in the end.

Once the U.N. gave its okay Monday, all sanctions by every other nation, except the U.S., will be removed in 90 days. Game over.

John Kerry claimed two things in an interview with Chuck Todd this past weekend. He said they could never have gone to Congress before the U.N. and the U.N. removal of sanctions won’t take place for 90 days which gives the Congress time to vote in their 60-day period. It’s a sinuous twisting of reality. Kerry even said it would be presumptuous to go to Congress before the U.N.

Kerry told Congress it doesn’t matter if Congress agrees with the nuke deal because Iran doesn’t care! We’re in bed with Iran in other words.

The Corker Amendment actually made it impossible to defeat the deal and enabled Barack Obama to circumvent the Constitution. It also allows Congress to pretend they’re against it. This is the power of the people they gave up.

The United States is being cut down to enable the global powers supremacy.

It is an affront to the U.S. people and Congress and a maneuver that makes the American people irrelevant by giving the U.N. the ultimate authority.

The New York Times is presenting it as a case of the Congress getting their feathers ruffled. The Obama administration violated the Constitution but the NY Times ignored that. Thanks to Sen. Corker, however, the administration is getting away with it because they agreed to abolish their own powers!

In the end, all Congress was promised under the Corker bill was the right to vote on the sanctions the Congress had voted in. U.S. sanctions against Iran include waiver provisions that Obama agreed to give up for 30 days and they include other sanctions imposed over the years by executive order that the president retains the right to waive.

The sanctions imposed by the U.N. and the other nations are the most important sanctions and the administration always retained the right to abandon them without Congress reviewing the deal.

The Corker bill supports the Obama scheme allowing international law to supersede the Constitution. It says it supports all elements of the nuclear deal except for the STATUTORY sanctions.

This ill-conceived Corker deal, in which they gave up the Senate’s treaty power as the line of first defense, was allegedly an effort to stop the president because they didn’t know how to keep him from calling it an agreement though it is obviously a treaty.

It now sets precedent for other treaties such as the climate change “agreement” and the Arms Trade Treaty.

Both the president and the Democratic party are led by the hard left.

The Framers had a prescient fear of ideological factions whose purpose is to acquire centralized power to force their beliefs on the people as opposed to preserving the Constitution. They carefully-defined separation of powers as the safeguard against the accumulation of tyrannical powers in one branch.

To work, each branch must defend its powers from encroachments by the other branches but the Democratic party will not do that as they have shown time and again. They gave Barack Obama a standing ovation in the halls of Congress when he said he would do what Congress has failed to do which was to follow his dictates. They cheered when he said he would use his pen and phone.

The movement left requires the presidency become all-powerful in order to impose its agenda.

Democrats no longer stand for the Constitution, they stand for Obama’s leftist priorities which are decidedly anti-free market Capitalism but pro-crony Capitalism.

Our politicians willingly give up their powers for the prime objective.

Congress had no way to to prevent the Iran deal and made a deal that gave them crumbs. It was a mistake born of helplessness perhaps.

The Republicans said they thought it would force the president to produce the agreement to the full Congress and they would get to vote on the entire agreement. It was a dream and it was not written into the bill.

Even if Obama ever did intend to submit it to Congress before the U.N., Democrats never had the power to stop it in the Senate. The 54 seats Republicans control are a majority but six shy of the 60 necessary to invoke cloture and force a vote.

When Sen. Cotton demanded Congress have a final say as the Constitution demands and posted a letter signed by 46 of his fellow Republicans on his site demanding that very thing, Barack Obama and many Democrats joined the Ayatollah in condemning our own Congress.

Obama acted as the Ayatollah’s agent against Congress as well as throughout the negotiations.

We were lied to from the beginning.

The much-publicized “fact sheet,” gave us the “framework” deal with Iran – snap nuclear inspections of all suspicious sites, a greatly reduced number of centrifuges, delayed sanctions relief until Iran satisfied its denuclearization obligations. Iran said it was all lies and most of it was. Iran will reduce their centrifuges – they say – but they will continue R&D and they will be taught by the West how to make new and better ones.

The Iranians have been bragging about the deal they were getting, revealing details, and our government has been lying.

The Iranian Foreign Minister said that it will be a deal made with the U.N. and Congress would have no role. He said if Congress rejected it they would “be a global outlaw.”

Barack Obama has not so subtly aligned the United States with the terror-sponsoring nation of Iran while alienating our allies in the region. The deal gives Iran hegemony in the region where they constantly stir up chaos and engage in terror.

When the Ayatollah said “all our goals are materialized” under this deal, he was serious. He was so thrilled that he led Friday prayers with “Death to America” chants on Friday.

Hillary Clinton has called this thing “an important step”. Hillary is running as Obama’s third term. She licked her finger, held it to the wind and felt it moving hard left.

Obama always has a good excuse to damage the Constitution. In this case it’s to avoid war though all indications are that he’s wrong as he has been wrong on foreign policy since he came into office.

Bullshit! This crap does not supercede the Constitution.

It's absolutely galling that this treasonous fascist tyrant and his covey of collaborators has yet to be rounded up and thrown into the dankest, darkest dungeon with no chance of return.

Actually, I would only question one part of this. The Churchill quote actually came true as Neville Chamberlain was forced to fight the war he tried to appease his way out of.

Obama and Kerry will be out of office in a couple f years when Iran announces a successful nuclear test. And the media will protect them, just as they protected Bill Clinton after the Korea fiasco.

Usual 'considerable time' and 'patience' with possibly a dollop more.

It just struck me: When Iran conducts its first successful nuclear test in a couple of years, if a Republican is president at that time, any bets on the media spin being, "Obama negotiated a great deal with Iran that kept them from developing nuclear weapons during his term, but once a Republican took office he blew it"?