Living in an Age of Evil


Sodom and Gomorrah were cities mentioned in the Book of Genesis and throughout the Hebrew Bible, the New Testament and in deuterocanonical sources... 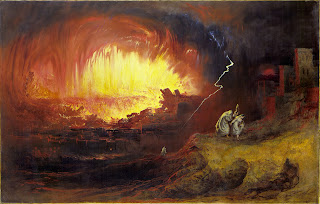 According to the Torah, the kingdoms of Sodom and Gomorrah were allied with the cities of Admah, Zeboim and Bela. These five cities, also known as the "cities of the plain", were situated on the Jordan River plain in the southern region of the land of Canaan. The plain, which corresponds to the area just north of the modern-day Dead Sea, was compared to the garden of Eden as being a land well-watered and green, suitable for grazing livestock.

Divine judgment by God was then passed upon Sodom and Gomorrah and two neighboring cities, which were completely consumed by fire and brimstone. Neighboring Zoar (Bela) was the only city to be spared. In Abrahamic religions, Sodom and Gomorrah have become synonymous with impenitent sin, and their fall with a proverbial manifestation of divine retribution...

In shocking video obtained by the Center for Medical Progress and first reported by Live Action News, a top Planned Parenthood executive is seen attempting to sell body parts from aborted babies.

Dr. Deborah Nucatola, Planned Parenthood’s senior director for medical services, is caught on video bragging about how she aborts babies in such a way that their body parts and organs can later be sold for profit.

“We’ve been very good at getting heart, lung, liver, because we know that, so I’m not gonna crush that part,” Nucatola tells actors posing as organ traffickers. “I’m gonna basically crush below, I’m gonna crush above, and I’m gonna see if I can get it all intact.” ... “I’d say a lot of people want liver,” Nucatola continued. “And for that reason, most providers will do this case under ultrasound guidance, so they’ll know where they’re putting their forceps.” --Sean Davis

That texts may be imaginatively interpreted to any end is not news — “The devil can cite Scripture for his purpose,” as William Shakespeare observed in The Merchant of Venice. The legendary constitutional scholar Barack Obama failed to notice, until the day before yesterday, that the Constitution mandates the legalization of homosexual marriage from sea to shining sea, but, to be fair, that is an easy provision to overlook, even for a mind as keen as Barack Obama’s, since the Constitution does not say one word about marriage, much less about the state-level codification of homosexual couplings being a fundamental federal right. --Kevin D. Williamson

Iran was and will remain a player driven by goals of domination. It wants to export its revolution as quickly as possible to as many places as possible. It funds terrorism and is politically subversive against rival regimes, such as Sunni governments with ties to the West. The agreement will not change Iran, but it will elevate it to the status of a country ‘on the cusp of having nuclear weapons.’ This means that countries that consider Iran a threat, such as Saudi Arabia, Turkey, and Egypt, will want to catch up to it, and a nuclear arms race will ensue in the Middle East. --Israeli Defense Minister Moshe Ya’alon

10th Circuit to Little Sisters of the Poor: Comply with contraception mandate

... This means that the Little Sisters of the Poor will be forced to comply with the mandate or face ruinous penalties, even while appealing their denial of religious exemption by HHS. The idea that Catholic nuns are somehow required to provide contraception through their insurer to their employees — who had to know that Catholic nuns would be the last group one would ask for contraception — demonstrates just how ridiculous this mandate is. --Ed Morrissey

We are living in an Age of Evil.

Many are complicit, but all will suffer.