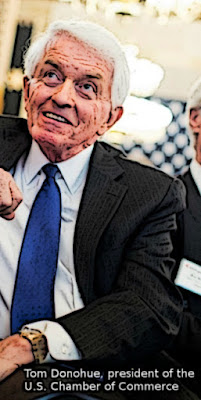 The U.S. Chamber of Commerce is paving the way to unseat “obstructionist” Republicans in the House who have successfully blocked much of the organization’s agenda.

The move is spurred by Chamber frustration after the group poured nearly $70 million into the 2014 election to strengthen the Republican coalition in the Senate, only to have its efforts thwarted in the House, Politico reported Friday.

The Chamber intends to primary sitting House conservatives who have halted many of its legislative priorities, including immigration reform, the Export-Import Bank’s renewal and a long-term highway bill.

Ken Cuccinelli, president of the Senate Conservatives Fund, said the group’s strategy to target conservatives verifies that the lobbying organization is interested solely in “cronyism.”

“The Chamber exists to force taxpayers to line the pockets of large corporations and will do whatever it takes to defeat lawmakers who fight for the American people,” he said.

Chamber spokeswoman Blair Holmes downplayed the move as a “recommitment” to the organization’s success in last year’s primary and general elections. She told Politico the Chamber supports “pro-business” candidates regardless of party affiliation or incumbency status.

But Politico noted that the move marks a “major shift” for the business community, as the Chamber has traditionally avoided targeting sitting lawmakers.

David Bozell, president of ForAmerica, said “preserving” conservative members will be a priority in the upcoming election cycle for both his organization and the entire conservative community.

“If the Chamber of Commerce wants to pick a fight, then the conservative movement is going to have to be ready, and I’m sure we will be,” he said.

The group has already started looking into several races, though nothing is official and the targets have yet to be decided, a pocket of Republicans on K Street and Capitol Hill told Politico.

“If the Chamber of Commerce wants politicians in Washington that increase spending, shill for corporate welfare and enact sweeping amnesty, they should support Democrats,” said Dan Holler, communications director for Heritage Action.

Steve Caldeira, a member of the Chamber’s public affairs committee and CEO of the International Franchise Association, defended the plan, predicting that the Chamber will involve itself early to find candidates who will work in a bipartisan manner to “get things done.”

“The fact that there are still members of the Republican House that are obstructionist, isolationists that would be willing to shut down the government only reinforces that the Chamber and the business community, for that matter, will double down on this winning formula,” he told Politico.

But efforts will likely face pushback from conservative groups looking to retain influence on Capitol Hill.

“Our grassroots members stand ready to fight these corporatists who are destroying our country with massive spending, bailouts and debt,” Cuccinelli said.

This is why people are supporting Donald Trump. If the Republican party wants to hold on to their majority, they need to dump the Chamber. (They won't, greed is too strong a motivator.)

Right leaning Americans do not trust Republicans right now, and with very good reason. I, for one may never vote Republican again, I won't vote Left, but I may stay home.

They need to dump Boehner and McConnell and pick leaders who want to save the country. 'Cause we're not going to survive the trajectory we're on right now.

Kay, I agree with you, but please remember that Ted Cruz is the one member of Congress who has repeatedly stood up to the GOP establishment and Obama.

Boehner ,McConnell endorse getting rid of Conservative Congress members .. stop giving money to RNC
Trump in 2016 or no other vote for Rinos .. Adios Bushy

People need to act. They need to do something. Anything they can bring, to the fight. Whatever that may be. Any way they can help to stop this active treason. No matter how small. How insignificant. Whatever you can muster. But you must stand. And you must deliver.

And you must do it now.

No second guesses. You got the opportunity?

YOU TAKE IT MOFO's

This isn't a game.

This isn't a drill. These aren't words people. They are a command. This is our only, and last chance. Heed my words well. Or perish ... in the approaching hellfiire. This ain't no fookin' disco!! It's the real world. And it's in our weak trembly hands.

The enemy must have a name and must be named. The enemy is Mitch McConnell and his leadership. Like a cancer he is killing the very body he inhabits.