Try and contain your shock, but it turns out that Hillary Clinton blatantly lied to the American people about the use and nature of her illegal, personal email server. Simply operating her own server to conduct official business was in all likelihood a direct violation of federal statutes; but sending and receiving classified information using personal servers is another set of crimes entirely.

Several Inspectors General in the Obama administration have reviewed a tiny fraction of the Clinton emails and determined that 10 percent were classified SECRET or higher at the time they were transmitted.

As a result of the findings, the inspector general referred the matter to the Federal Bureau of Investigation’s counterintelligence division. An official with the Department of Justice said Friday that it had received a referral to open an investigation into the potential mishandling of classified information. Initially, a Justice Department official said Friday morning the investigation was criminal in nature, but the department reversed course hours later without explanation.

“The department has received a referral related to the potential compromise of classified information. It is not a criminal referral,” an official said.

The four emails in question “were classified when they were sent and are classified now,” said Andrea Williams, a spokeswoman for the inspector general. The inspector general reviewed just a small sample totaling about 40 emails in Mrs. Clinton’s inbox—meaning that many more in the trove of more than 30,000 may contain potentially confidential, secret or top-secret information.

The inspector general’s office concluded that Mrs. Clinton should have used a secure network to transmit the emails in question—rather than her personal email account run off a home server.

“None of the emails we reviewed had classification or dissemination markings, but some included IC-derived classified information and should have been handled as classified, appropriately marked, and transmitted via a secure network,” wrote Inspector General I. Charles McCullough in the letter to Congress.

The emails in question left government custody and are on both Mrs. Clinton’s personal home email sever as well as a thumb drive of David Kendall, Mrs. Clinton’s personal attorney... [Clinton's] 55,000 pages [of emails not already destroyed] are being reviewed for public release. In one instance, classified information has already been released to the public, the inspector general found.

In part, the IG's memo reads:

On June 26 and June 27, 2015, Department staff responsible for FOIA issues further reviewed a
portion of the 55,000 pages that have been or are to be reviewed. They report discovering
hundreds of potentially classified emails within [that portion of] the collection.

In other words, it's likely that Hillary's email server -- which experts say was immediately hacked by Russian, Chinese and Iranian intelligence agencies -- contained thousands of classified documents that are now in the hands of foreign governments.

And let's recall why Clinton was operating a private email server to conduct government business in the first place. As author Peter Schweizer revealed in his bestseller Clinton Cash, she was trading favors with foreign entities in exchange for payments to her family's foundation. And the Clintons have yet to describe how their family fortune was created during her time at State. 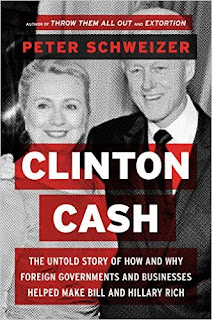 Hillary hasn’t explained why her State Department approved the transfer of 20% of US uranium to the Russian government — even as her family foundation hauled in $145 million from investors in the deal, and Bill received $500,000 from a Kremlin-backed bank for a speech in Moscow.

Hillary has yet to explain why there was no conflict of interest in allowing top investors in the Keystone XL pipeline to pay her husband $1.8 million to deliver 10 speeches, even as she quietly shepherded an environmental impact study through her State Department that proved largely supportive of the pipeline.

Nor has Hillary explained why she violated the memorandum of understanding she signed with the Obama administration promising to disclose all donors, including the foreign head of the Russian government’s Uranium One, Ian Telfer, who funneled four donations totaling $2.35 million to the Clinton Foundation that were never revealed.

As some have noted, David Patraeus narrowly avoided jail time for far less egregious activities than those of which Hillary is accused.

Hillary's answers demonstrate that she is clueless (or, worse, complicit with foreign governments) regarding the handling of classified information.

And these incidents are just the most recent in a laundry list of cover-ups, scandals, and other criminal activities.

Little wonder her poll numbers are tanking: no one trusts her.