Writing at Bloomberg View, investigative journalists Eli Lake and Josh Rogin reveal new and crucial details of Barack Obama's nuclear agreement with Iran. As we find out more about the nature of the deal, it is little wonder that members of Congress are growing increasingly "alarmed" (emphases mine). 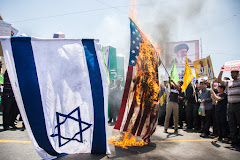 As the White House campaign to persuade Congress about the wisdom of its Iran nuclear deal moves into its second week, important components of the complex agreement are emerging that will be shrouded from the public and in some cases from the U.S. government itself.

The existence of these secret clauses and interpretations could undermine the public's trust in the Barack Obama administration's presentations about the nuclear pact. Already Republicans and other critics of the deal have seized on the side agreements between Iran and the International Atomic Energy Agency as a weakness in the deal closed last week in Vienna.

The controversy began on Wednesday when Secretary of State John Kerry told House lawmakers behind closed doors that he neither possessed nor had read a copy of two secret side deals between the IAEA and Iran, according to Representative Mike Pompeo, a Republican member of the House Intelligence Committee who was inside the session. Congress hasn't seen those side agreements either.

“Kerry told me directly that he has not read the secret side deals,” Pompeo told us in an interview. “He told us the State Department does not have possession of these documents.”

Any "agreement" with a country that has dedicated itself to your destruction is inherently insane. The legacy of Barack Obama, Hillary Clinton and John Kerry will center around the transformation of Iran from a terror state into a nuclear terror state.

Oooh, they're alarmed. BFD. Grow a pair and put Obama and his entire cabal on trial for treason. The entire senate and congress are just as guilty as Comrade Zero himself. They've had six years to stand up to this tyrant and they haven't done jack squat. It's time for all of us to get off our collective butts and start taking our nation back.

(Can it be?) Kerry's lying .... again (surprise!). Easier (much), to tell the lie. That he doesn't know (Banner/Sgt. Schultz), what's in the secret side deals. Than to actually anounce, their contents. I mean, no one calls these vermin, these insects, these scums*cking filth .... on ANY of their lies. It's some kinda alternate reality we now inhabit. Nothing is real. EXCEPT THEIR LIES. And only their lies (... are truth).

Me ... I gotta believe the side deals are quite specific. Very.

And I believe, they call for active military alliance/protection of/for Iran. By the U.N..

Against Israel. You know, that place that King Pigsh*t sez has the right to protect itself. And that's why he is doing everything he can, everything under the (fading to black) sun. To prevent them, from doing so.

Setting the stage. For global aggression. Against Israel. And reprisals. Financial. Diplomatic. Even the boys in blue, actually firing their weapons. For the very first time (in recorded history?).

It's called Armageddon b*tches. And it is here.