THE TROUBLE WITH TRUMP: 12 Years of Presidential Narcissists? 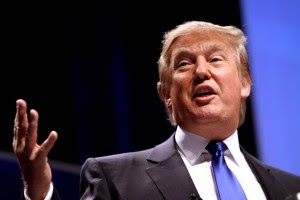 After seven years of a narcissistic president, the last thing the nation needs is another four. Donald Trump has all the same outward egocentric manifestations to which we’ve become accustomed. The problem with politicians imbued with such characteristics, is that everything they do is all about them, not those whom they are elected to serve, or the Constitution to which they take an oath of fealty.

Dr. Charles Krauthammer, a psychologist by profession, has said it’s clear that the current inhabitant of 1600 Pennsylvania Av. is a narcissist. “This is a guy, you look at every one of his speeches, even the way he introduces high officials — I’d like to introduce my secretary of state. He refers to ‘my intelligence community.’ And in one speech, I no longer remember it, ‘my military.’ For God’s sake, he talks like the emperor, Napoleon. He does have this sense of this all being a drama about him, and everybody else is just sort of part of the stage.”

Dr. Sam Vaknin, the author of the “Malignant Self Love,” and an expert on narcissism, concurs. Vaknin says, “Obama’s language, posture and demeanor, and the testimonies of his closest, dearest and nearest suggest that the president is either a narcissist or he may have narcissistic personality disorder (NPD). Narcissists project a grandiose but false image of themselves. After listing several 20th century examples, he explains how they all “created a personality cult around themselves and with their blazing speeches elevated their admirers.”

He elaborated, “For a narcissist no subject is as important as his own self. Why would he waste his precious time and genius writing about insignificant things when he can write about such an august being as himself? [Explaining why Obama had written an autobiography before he’d accomplished anything.] Narcissists are often callous and even ruthless. As the norm, they lack conscience.”

And now we have the bombastic, egocentric real estate mogul from New York mirroring the self-absorption seemingly endemic with our 44th president. And he’s already setting some records with his self-congratulatory rhetoric.

“I’m really rich.” “I’m proud of my net worth.” “I’ve done an amazing job.” “I’m really proud of my success. I really am.” “I’m not doing that to brag because you know what? I don’t have to brag.” But he just can’t seem to help himself! And so Donald Trump self-adulated himself 257 times in his 45 minute presidential bid announcement speech last month. That even exceeded Obama’s 208 self-laudatory references in his 22 minute, 2007 presidential announcement. That’s pretty impressive when you can out-“narcissize” the Narcissist In Chief!

Over the years, Trump has been a proponent for single-payer government funded healthcare, a socialistic step to the left of Obamacare. He’s been a supporter of abortion, has advocated an assault weapons ban, and has even floated the idea of forcing the rich to forfeit 14% of their total wealth to reduce the federal debt.

He has donated heavily to Bill and Hillary Clinton’s campaigns, and to the Clinton Foundation. And when he married his third wife in 2005, Bill and Hillary were on his guest list. And his financial support for Democrat House and Senate candidates has far eclipsed what he’s donated on GOP candidates.

According to public campaign disclosures, 21 of Trump’s 30 political donations have gone to liberal Democrats and political action committees. Only seven went to Republicans, and two went to Charlie Crist, who, like Trump, doesn’t seem to know which party he belongs to.

And in 2008, he sounded just like every other progressive in the nation, bemoaning George W. Bush’s presidency, when Trump alleged, “He was so incompetent, so bad, so evil.” Trump went on to call Bush “maybe the worst president in the history of this country.”

In light of his possible xenophobic comments regarding illegal aliens, it’s ironic what Trump said after the 2012 election. He claimed Republicans would “continue to lose elections if they came across as mean-spirited and unwelcoming to people of color.”

Trump’s primary function in the Republican presidential primary process seems to be to function as a media lightning rod. Ninety percent of the media coverage on the GOP candidates is on the Donald, which means he’s literally sucking the air out of the race of the fifteen other legitimate candidates.

So why is Trump polling so well in these early stages of the presidential sweepstakes? It pains me to say, really. But the only logical explanation is that regrettably even a fairly significant minority of conservatives can be deceived by the grandiloquence and fierce independence of a self-congratulatory narcissist, in spite of obvious ideological contradictions. A couple of pet issues that resonate with conservatives on a populist level, and a strident, even blunt, speaking style, and too many citizens can temporarily allow emotion to supersede logic.

At least let’s hope it’s a temporary condition. What a travesty it would be if someone like Trump became the party standard bearer in a year when so many truly qualified conservatives are on the ticket, or worse yet, if he became a third-party candidate that siphoned off enough votes to give the election to the control freak on the Democrat ticket.

The Republic for which the flag stood is dead. More kicking the can down the road, while conditions worsen, will not resurrect this once-great country.

Time to throw caution to the winds! I'm rolling the dice with Trump!

But, but, Mr. Larson...George W. WAS a progressive. Conservatives do not 'suspend the Constitution in order to save it.'

While you're seemingly worried that conservatives will be hornswaggled by yet another narcissist, many more will use the same old ideological purity test that kept them home last cycle - and THAT got us 4 more of the same.

I'm of the opinion that in a larger sense, the red/blue paradigm is over and done. It's us/them now, and a winner is very appealing. A red-blooded American male who doesn't back down is a problem exactly how? A reversal of malevolence masquerading as incompetence is a bad thing? It's about time we had 'you're fired' riding herd on the bloated carcass of bureaocracy. Pajama Boy is already pissing his onesy.

Sorry pal but after the parade of quasi conservatives we've been served up since 1988, someone like Trump, that at least is saying he loves this country, plans on making it great again and has the fred to back that up sounds good to me.

Plus, you don't think it's refreshing to watch someone on our side tell the left dominated media that they're losers and are fired???

Further, is it bragging if, yaknow, you've actually done great things, built beautiful buildings and developments? I make the most beautiful leaded glass windows in the last 80 years, is it wrong of me to note it?

Cruz is still my first pick but if he fades I'm all in for Trump.
MM

Trump supporters are every bit as devoid of critical thinking skills as those who voted for Obama.

GOP supporters are every bit as devoid of critical thinking skills as those who voted for Obama.

"GOP supporters are every bit as devoid of critical thinking skills as those who voted for Obama."

To be that idiotic one is way better to stay anonymous...

I concur with your assessment. It is amazing to watch the left right sheeple herd bleat for yet another change promising egotistical twit, that's CONTROLLED by the same system, lest he'd not get any airtime, good or bad . .The matrix got ahold of America.
The dummies on the right are as trained as the dummies on the left . The only change we will ever see is the change in puppets.
Our elections, politics are as controlled as any other mafia operation.