Spotted in a presentation from a conservative PAC that supports my preferred candidate, Ted Cruz. 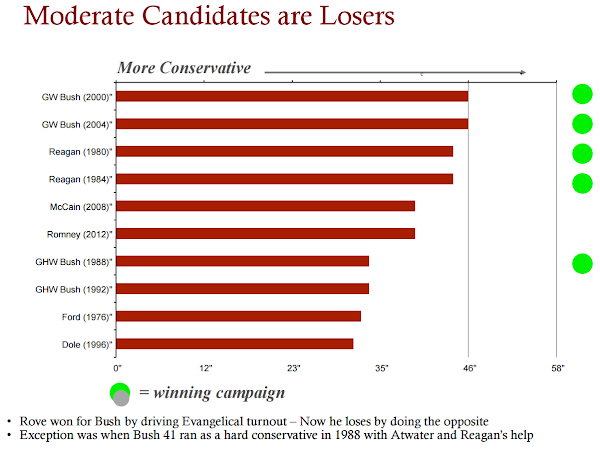 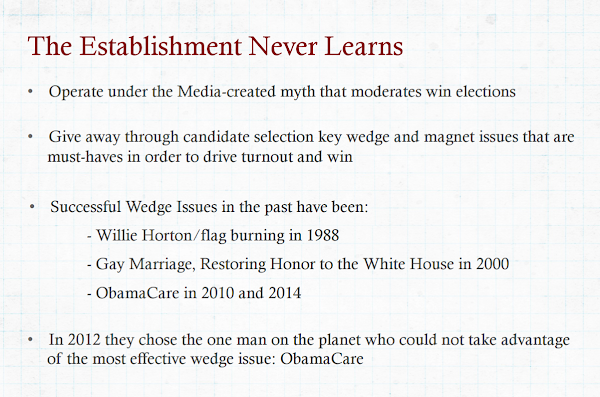 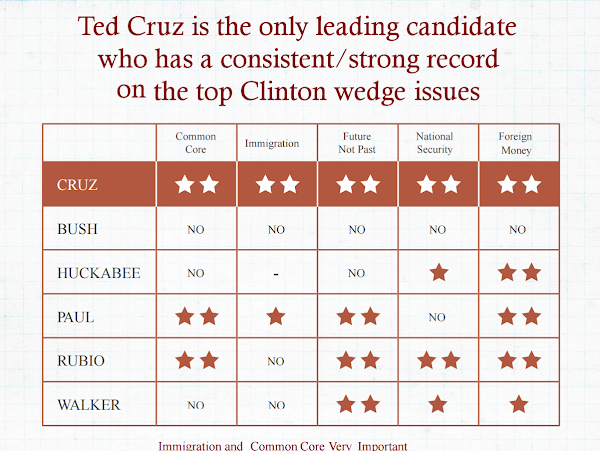 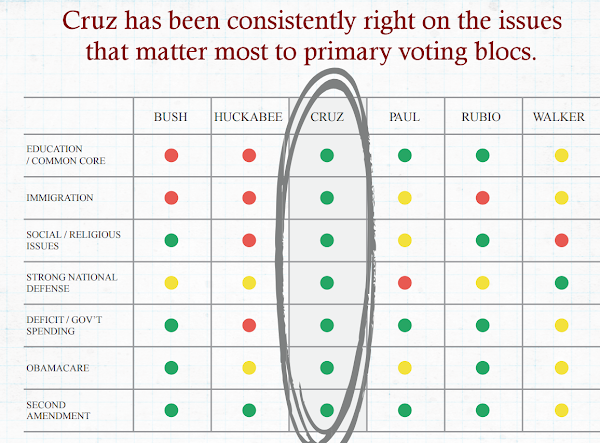 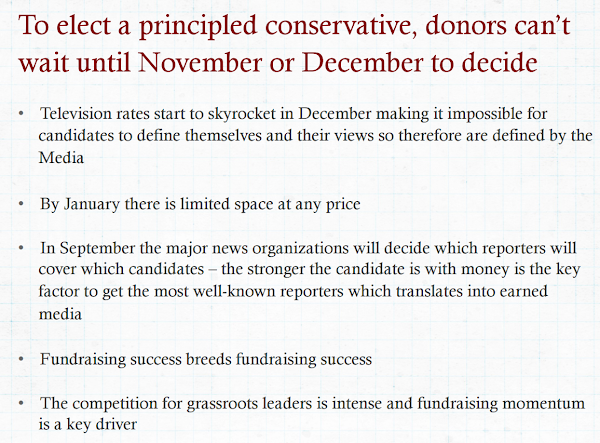 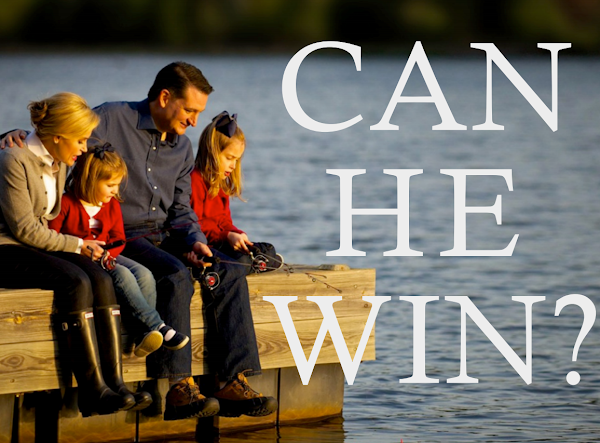 With zero apologies whatsoever, I support Ted Cruz for President. It's time to nominate a real conservative who can appeal to Americans of every race, creed, color and religion.

Cruz is just such a man.

Dr, i luvya - you know fhat, but waitaminnit. Dubya was a moderate. Pro campaign finance reform and pro amnesty and pro nclb and so on. And he won twice.

I luv cruz, but just saying he can win and be a good potus just cuz hes the most conservative in the race is silly, imo. Walker is a proven fighter and winner, and has actually run an executive branch. and defeated the enemy 4 times.

Cruz is brilliant and courageous, but im not convinced he can win.

Read Fed Barnes WSJ article today.. GOP establishment set to abandon white Conservatives and pursue illegals with amnesty and hope that this will help with Hispanic vote
No more money .. nor votes for GOP. adios LOL !!!!!!!!!!!!!!!!!!

Don't be fooled by Trump attacks by rinos ....Democrats and Republicans with Hispanics will merge into 1 party .. with Conservatives left out

The constitution says,
"No Person except a Natural Born Citizen…
shall be eligible to the Office of President...."
US Constitution: Article 2, section 1, Clause 5

By definition, a Law Review in 1845 rightly defined that:
"...the term ‘natural born citizen’ is used and excludes all persons owing allegiance by birth to foreign states.”
The New Englander and Yale Law Review, Volume 3 (1845), p. 414

Ted was born in CANADA. http://www.theblaze.com/stories/2013/08/19/ted-cruz-releases-birth-certificate-and-is-apparently-a-canadian-citizen-but/
The N. Y. Times, May 26, 1949, p. 26, columns 3 - 4, by legal example demonstrated that legally Franklin D. Roosevelt, Jr., third son of the late President, “never can carry that great name back into the White House” since his birth on August 17, 1914, was at Campobello Island, New Brunswick, Canada, home of a Roosevelt Canadian summer estate.


The United States Supreme Court had previously said in quoting Vattel:
The Venus, 12 U.S. (8 Cranch) (1814) 253 @ page 289
https://supreme.justia.com/cases/federal/us/12/253/case.html
"The natives or indigenes
are those born in the country
of parents who are citizens.
Society not being able to subsist and to perpetuate itself but by the children of the citizens,
those children naturally follow the condition of their fathers,
and succeed to all their rights."

Rafael Cruz Sr., Ted's father, is on record saying that at some time in the past
he naturalized himself as a Canadian Citizen (likely before he Ted was born).
http://www.npr.org/blogs/itsallpolitics/2013/06/20/193585553/how-ted-cruzs-father-shaped-his-views-on-immigration

Likely, at the time of Ted Cruz's birth, both father and mother were CANADIAN Citizens, making Ted a Natural Born CANADIAN Citizen, who should have moved back to Canada to run for various government offices in that nation.

However, in context of the U.S. Constitution's Natural Born Citizen Clause near to the time it was written, we must not forsake the fact that under the centuries-old doctrine of coverture, a married man and woman were treated by the State as a single, male-dominated legal entity. See 1 W. Blackstone, Commentaries on the Laws of England 430 (1765) Obergefell et al v. Hodges __ US __ (2014) @ 6 [thus requiring a Father who was needed to pass down any claim to Natural Born Citizenship as stated also by John Locke, Second Treatise on Government, Chapter 6: ‘Of Paternal Power’ §. 59]


Even Rafael Edward "Ted" Cruz, Jr. knows this since when he ran for the U.S. Senate in Texas as stated and quoted in
THE END OF THE AMERICAN PRESIDENCY By J.B. Williams March 29, 2015 NewsWithViews.com http://www.newswithviews.com/JBWilliams/williams300.htm

In a campaign interview during his freshman senate race, a GOP Texas State Committee member sat down with the young candidate to ask a few poignant vetting questions, and here are the questions and answers from that interview… (Redacted information is to protect the witness at this moment, but the witness is willing to offer sworn testimony)
Interviewer: “Hello Mr. Cruz, it's a pleasure to meet you. My name is (redacted). I am a (redacted) County GOP Precinct Chair and you have my support and vote. I have one question for you if I may?”
Cruz: “Sure, go ahead.”
Interviewer: “What is your understanding of how one becomes a natural born Citizen?”
Cruz: “Two citizen parents and born on the soil.”

TED CRUZ IS CONSTITUTIONALLY ILLEGAL
TO RUN FOR PRESIDENT OF THE UNITED STATES OF AMERICA.
THAT IS A LEGAL FACT!!!

@Brianroy: I fully agree with your well-expressed view on the meaning of Natural Born Citizen.

That said, now that we have the situation of a person totally without authentic paperwork who has been elected to our highest office, not once but twice; the Supreme Court presently consists of a great many people who apparently do not know how to read, or parse a sentence, but are committed to an agenda; the DOJ, the FBI, Homeland Security all have been infiltrated with far left ideologues who refuse to fulfill their constitutional requirements but instead falsify the law while prosecuting (and persecuting!) those who hold the Constitution in high regard.

I realized some time ago that my beloved country is dead.

I refer of course to Donald Trump, who wants to Make America Great Again!

Since I see that there is nothing to lose, and a wonderful country to regain:

@Reliapundit, likewise, but weren't you a big Romney guy in 2012? Yes, he was the pragmatist's candidate, but had no credibility with the base and was the godfather of Obamacare.