Why do we have anything to do with this clown-car crap?  When is it enough? 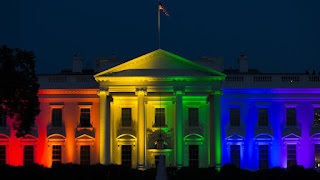 The White House has now reversed itself and ordered flags flown at half-mast -- but not until after they refused to do so while the Capitol (and the States) did.

How much more do you need to see when five of our servicemembers are gunned down in an act of terrorism on our soil, potentiated by a government that refuses to recognize everyone's 2nd Amendment rights, including members of our military, and then goes even further by posting "gun free zone" signs on the door!

Oh, it doesn't stop there either.  If your grandmother has a gun for personal protection (and is not a frail older person the exact sort of person for whom that equalizer is most important) but has someone else (like you) run her bank account for her Obama wants to confiscate her gun.

Where is your limit of tolerance for this crap America?

You don't need any damn permit to write a blog or start and operate a newspaper.

You don't need any damn permit to worship as you see fit.

If anyone tried to tell you that needed a permit to write either in print or online, or before you could pray, you'd stick up the middle finger.

A right is not conditioned on any damn permit and the Second Amendment is clear in its language just as is the First Amendment -- so why is your middle finger not in the air right here and now?