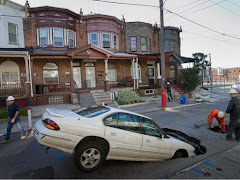 There were two accidents on the Schuylkill Expressway last Monday morning. You know what this meant. I had the pleasure of traveling to work on the scenic 30 Blocks of Squalor. The 30 blocks from 69th Street in Upper Darby to 39th Street in West Philly is a tribute to government incompetence, failed government policies, shoddy union labor practices and fiscal mismanagement.

This entire thirty block trek could be completed in 5 to 10 minutes if the hundreds of union government drones in the Philadelphia Streets Department would get off their fat asses and timed the lights. The blocks are identical in distance. They don’t need advanced degrees in physics or calculus to set the lights to go green every ten seconds in order. They were timed in the 1970s and 1980s. Would smoothly flowing traffic be such a bad thing? Do they not care or are they really this incompetent? The first light at 61st Street was red when I arrived. It turned green and before you could touch the gas, it immediately turned yellow and red again. I wondered how long they’d allow this to go on. My guess would be days.

I’ve noted in previous 30 Blocks screeds that Philadelphia put a thin veneer of blacktop on the entirety of Chestnut Street about two years ago. I’ve also detailed the dozens of water main breaks that occur on a regular basis under the streets of Philadelphia, causing tens of millions in property damage. This is how corrupt incompetent government drones run the show. They gloss over the long-term real structural problems with a thin veneer of cheap half assed faux solutions that provide the false appearance of fixing something.

Ignoring the deeply rooted fundamental issues like crumbling hundred year old pipes and dangerous disintegrating Amtrak train tracks, while throwing down some blacktop, painting white bike lanes on streets where no one in their right mind would ride a bike, and installing wheel chair ramps on every corner even though a wheel chair could never navigate the crumbling trash strewn sidewalks, is the height of willful dishonesty and incompetence. Two years after smoothing over the bumps and potholes on Chestnut Street with tons of blacktop, driving the 30 Blocks of Squalor is now like driving in downtown Baghdad after a Sunni/Shia family reunion. 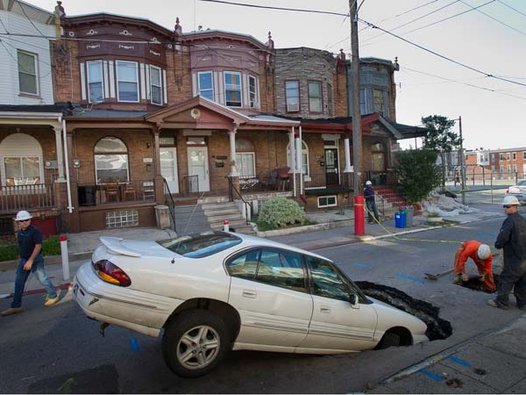 There are gaping craters dotting the landscape along the entire putrid route of boarded up hovels, dying businesses with bars on every window, collapsing porches, sidewalks strewn with trash & debris, and murals of black people doing great things. The streets are literally collapsing into the rat infested sewers below. There is an occasional orange cone in front of the gaping holes, but most are unidentified until your car blows a tire or ruins their alignment. Cars come to sudden stops if they recognize the danger ahead. If the lights were timed this would be a real bummer. Luckily the average speed is 10 miles per hour, so you can usually survive the trek. 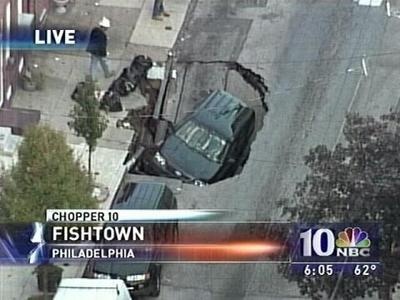 What is the point in spending millions of taxpayer dollars blacktopping streets which are crumbling from below? Why not fix the problems below before applying the blacktop above? Because the city is bankrupt. The infrastructure isn’t crumbling because they don’t have enough money. It’s crumbling because they have chosen to spend taxpayer money on gold plated pensions and health benefits for union government workers and teachers. They’ve wasted hundreds of millions on public schools that only graduate 50% of those entering and most of those graduates are functionally illiterate. They spend millions painting murals, giving tax breaks to mega-corporations like Comcast, and building sports stadiums for billionaires. The corruption, mismanagement, incompetence and stupidity of politicians, government bureaucrats, and union officials is breathtaking to behold.

Building 101 luxury low income townhouses in the midst of squalor, depravity, drugs, crime, and welfare mentality, with $27 million of taxpayer funds is the kind of waste created by liberal do-gooder politicians like Michael Nutter and Barack Obama. The $27 million should have been spent replacing ancient water mains before they burst and destroyed businesses and homes, costing the city and its citizens millions in lost business and property damage. The Mantua Square debacle gets better by the day. It was built using Obama’s $900 billion porkulus funds. It sits within one of Obama’s Promise Zones in the Mantua section of West Philly. Last month they found a dead body on the same block as Mantua Square. Ten people were shot a few blocks away on the same night. Does it sound like this low income housing estate has upgraded the neighborhood?

I’ve previously noted the eight retail store outlets built into the project remain vacant three years after their construction. It seems if you build it in West Philly they won’t come. Not one black entrepreneur has launched the next Google or even a new hip hop clothing store. Mayor Nutter said these retail outlets would revitalize the neighborhood. This is how liberal lunatic politicians think. They actually think a business would open in a neighborhood where median household income is $18,000, drugs and crime are rampant, the population is uneducated and unemployed, and the city taxes are outrageously high. The mind of a liberal is a waste of brain cells.

But the story has gotten even better in the last month. This gated monument to liberal waste has now proven to be another testament to government incompetence. It is located on Wallace Street between 35th and 36th Street. Virtually every morning, I make a right turn at 34th and Wallace and then make a left turn onto 36th to get to my job. The street began to sink at 34th and Wallace about a month ago. Someone put up three orange cones, but nary a government union drone from the Streets Department has arrived to fix it. Of course, this is just a minor pothole compared to the moon sized crater at 35th and Wallace. It began to sink months ago. Someone eventually filled it with some blacktop, but it now has grown to approximately 5 feet in circumference and three feet deep. The residents have filled it with crates and miscellaneous debris. Multiply this one block by hundreds to get a feel for the deterioration of this city.

In the last few weeks it seems the taxpayer is getting the opportunity to pay union construction workers more money to fix the incompetent shoddy work they did when building this low income paradise. The picture below, besides showing the vacant retail outlets, emphasizes the protruding windows on each unit. Keep in mind you paid $245,000 per townhouse, just three years ago. The union construction workers are now ripping off the facings of every protruding window section and replacing them. Evidently, every one must be leaking. You can be sure the place was originally built with requirements that minority contractors must be used. I’m sure the taxpayer is paying a 40% union labor premium for more shoddy repair work. But at least they’ll be slow so they can milk this job for a few months. Incompetence abounds in Philadelphia. There is no accountability, no brains, no common sense, and when they are done – no money. 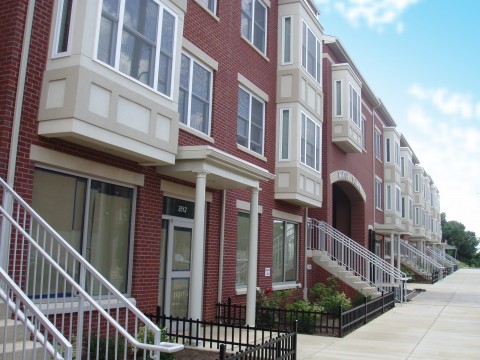 Into this crumbling city of bumbling fools we have Pope Francis arriving in late September. The city will be overwhelmed with 2 million more people than normal. It’s a gridlocked shitshow on a normal day. It will become an epic clusterf*** during this week. I will either use vacation time or work from home. The incompetence of government was on full display last week as SEPTA announced to great fanfare that people would need a special Pope Pass to ride SEPTA during his visit. They hired a vendor with $500,000 of taxpayer funds to build a website where people could purchase a pass. The site crashed 15 minutes after it was launched and hasn’t been back up since. I wonder if the taxpayer will get a refund.

It seems the politicians, government bureaucrats, union bosses, school board, and civic leaders of Philadelphia have achieved hierarchical nirvana.