10 Insanely Vicious Crimes Committed By Illegal Immigrants, Most of Which Media Refuse to Report 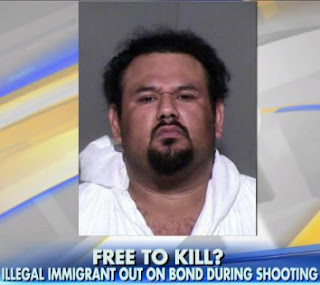 Unfortunately, even though we could prevent thousands upon thousands of violent crimes by securing our borders, the Obama administration refuses to do so and it has become very politically incorrect to even talk about this. Every single day, American citizens are being murdered and raped by people that should not be in this country and yet nobody is supposed to address this issue. No wonder our nation is in the process of self-destructing. The following are 10 horribly violent crimes that were committed by illegal immigrants…

Kate Steinle was walking on a busy pier in San Francisco with her father when there was a single popping sound in the air.

She fell to the ground, struck by a bullet, the victim of what police say appears to be a random killing.

The man accused of firing the deadly shot — 45-year-old Juan Francisco Lopez-Sanchez — is an undocumented immigrant, a repeat felon who has been deported five times to Mexico, according to immigration officials.

On Thursday, Michigan police arrested a Mexican illegal alien, 23-year-old Aurelio Hernandez-Gomez, after finding him with a 13-year-old Florida girl who had last been seen two days before her ordeal.

Cops acted on a tip that led them to a Hartford home where Hernandez-Gomez hid the girl while assaulting her.

#3 Earlier this year, an illegal immigrant in Alabama was arrested and charged with sodomizing a 10-year-old girl…

An illegal immigrant was arrested Monday in Alabama after sexually assaulting a young girl.

According to reports, Ramiro Ajualip, a 27-year-old who entered the country illegally, was accused earlier this week of raping a 10-year-old girl on Feb. 27 while he was living with the child’s family.

Ajualip was charged with first-degree rape and first-degree sodomy, which are both Class A felonies in Alabama and carry with them sentences ranging from 10 years to life in prison with parole a possibility if convicted, according to a local report.

#4 While taking refuge in the “sanctuary city” of Philadelphia, one illegal alien decided that it would be a good idea to attack and rape a 26-year-old doctor as she walked home from work…

Living and working in sanctuary, Mr. Garcia last month, according to police, approached a 26-year-old Philadelphia doctor who was walking to her home in the city’s fashionable Rittenhouse Square neighborhood after a night out with friends. He is accused of forcing the woman into her apartment and raping her repeatedly.

Police said Mr. Garcia then stole the victim’s cellphone and rode away on his bicycle. In perhaps not the smartest of moves, Mr. Garcia kept the victim’s smartphone in his possession. Police said they found him, in part, by calling the phone and locating its signal.

#5 In Arizona, an illegal immigrant that had been deported six times has just been charged with a hit-and-run. It turns out that the vehicle that he hit contained a young mother and her two very young children…

A six-time-deported illegal immigrant is charged in the felony hit-and-run of an Arizona mother and her two young children. The man allegedly admitted to being high on marijuana while causing the severe lacerations to a five-year-old boy. The five-year-old and a two-year-old were both taken to an area hospital.

#6 In Porterville, California a drunk illegal immigrant plowed through a fence and killed a 3-year-old girl that was standing in line for ice cream…

An illegal immigrant driving drunk and without a license crashed through a fence Sunday, hitting and killing a 3-year-old girl as she was waiting in line for ice cream in Porterville, California.

Adolf Balbuena, 18, mowed down the toddler, Angeles Moreno, as she and several others, including an 8-year-old boy, were waiting line at an ice cream truck.

After hitting Moreno, Balbuena backed up and drove away. He was arrested at his home around an hour later, the Fresno Bee reported.

#7 Down in Laredo, Texas an illegal immigrant that had been deported four times confessed to murdering his wife with a hammer…

Breitbart Texas has exclusively confirmed that a man who confessed to murdering his wife with a hammer in Laredo, Texas is a four-time deported illegal immigrant who would not have been in the U.S. had he not been able to illegally cross back into the country multiple times from Mexico after his deportations. In addition, the Laredo Police Department continuously encountered the man in violent episodes with his wife, yet did not notify Border Patrol, according to federal agents who spoke with Breitbart Texas on the condition of anonymity.

#8 In DeLand, Florida a 27-year-old Mexican immigrant that is here illegally has been charged with raping a woman that cannot hear or speak…

A 27-year-old Mexican man is locked up after police charge him with raping a woman who cannot hear or speak.

The DeLand Police Department says they were called out to Florida Hospital DeLand on November 19th when a 37-year-old woman told a friend she had been raped by Corona-Martinez.

#9 Earlier this year, a 29-year-old illegal immigrant killed a convenience store clerk in Phoenix over two packs of cigarettes…

Altamirano is accused of shooting Ronnebeck and stealing two packs of cigarettes after the clerk demanded payment before giving Altamirano any cigarettes.

The murder was recorded on the store’s security camera and police captured Altamirano after a high speed chase in Phoenix.

Altamirano had previous run-ins with local police and Immigration and Customs Enforcement. In 2012, he pleaded guilty to facilitation to commit burglary and got probation but was placed in deportation proceedings.

Before the murder of Ronnebeck, Altamirano was released on a $10,000 bond in 2013 from ICE custody despite the defendant’s own claims of ties to the Mexican Mafia.

#10 Not too long ago, three members of the MS-13 street gang forced a 16-year-old New York girl into the woods and took turns brutally raping her…

Three MS-13 street-gang members from El Salvador are being held without bail on charges they forced a 16-year-old New York girl into the woods near a golf course, and two of them raped her while the third kept watch.

“This is one of the most brutal, heinous crimes that I have seen in a long, long time,” Suffolk County District Attorney Thomas Spota said at a news conference, according to New York’s WNBC-TV. “This poor young woman is so lucky that, quite frankly, that she is alive. These are vicious young men, vicious young men, and what they did to her was absolutely terrible.”

Spota, who said the attack was “barbaric,” identified the suspects as 17-year-old Jose Cornejo, 18-year-old Bryan Larios and 17-year-old Joel Escobar. All three of the MS-13 gang members, who are from El Salvador, were arrested May 29 just hours after the attack. They are being charged as adults.

According to Democrats (and some Republicans), we should not be too concerned about crimes such as these because the general population commits crimes at about the same rate.

But when they tell you that, they are flat out lying to you. The following numbers come from a recent American Thinker article…

Conclusion: criminal and illegal aliens commit murder at much higher rates than all inhabitants of the U.S. – at least 3 to 10 times higher.

We desperately need to secure our borders, but most of our politicians are against doing that because they believe that it would be bad for them politically.

So hardcore criminals, drug runners, gang members and sex offenders are going to continue to pour into this country. And what makes things even more infuriating is that there are hundreds of “sanctuary cities” that have rolled out the red carpet for them. If you can believe it, many of these sanctuary cities actually have a practice of releasing illegal immigrants with criminal records back into our communities rather than turn them over to the feds…

Some 276 “sanctuary cities,” nearly 50 percent more than previously revealed, released over 8,000 illegal immigrants with criminal records or facing charges free despite federal requests that they be turned over to Immigration and Customs Enforcement for deportation, according to an explosive new report.

The Center for Immigration Studies, revealing new numbers it received under the Freedom of Information Act, said that those releases from cities that ignored federal demands came over just eight months and are just part of an even larger release of 17,000 illegals with criminal records.

Why has Barack Obama been releasing thousands of illegal immigrants that have been convicted of crimes back on to the streets of our cities? According to U.S. Senator Chuck Grassley, more than 36,000 were released from custody in Fiscal Year 2013 alone. These individuals were actually convicted of committing crimes, and many of them went on to commit new crimes once they were released by Immigration and Customs Enforcement. In fact, Senator Grassley says that 121 of the criminals that were released during Fiscal Year 2013 were subsequently charged with committing murder. That means that more than 100 American citizens are now dead because of Obama’s foolish policies. Why is Obama doing this? He knows that one out of every five illegal immigrants has a criminal record, and he knows that many of these convicted criminals that he is releasing will go on to commit new crimes. What possible justification could Obama have for doing this to our communities?

If we do not secure our borders and we continue to release convicted criminals back into our communities instead of deporting them, a lot more innocent people are going to get raped and murdered.

The families of those that have already been murdered can never get their loved ones back.

Those that have been brutally raped can never erase what has been done to them.

But we could prevent many future violent crimes if we were just willing to take some common sense measures to protect our citizens.

So why won’t our politicians do something?