Not that appears to have ever stopped this particular president. That said, Molly O'Toole at DefenseOne describes yet another bizarre White House plan to endanger Americans.


White House officials say they’re getting close to delivering a plan to close the U.S. military prison at Guantanamo Bay, Cuba, as Congress has demanded for years. There’s one problem: a key part is illegal — at least for now. 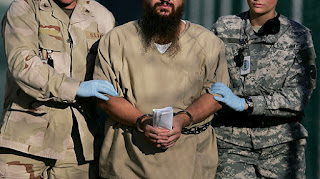 Current U.S. law forbids the transfer of Guantanamo detainees to prisons on U.S. soil — and yet there are some prisoners who cannot be sent anywhere else, Deputy National Security Advisor Lisa Monaco said Saturday.

“We are going to whittle down this group to what I refer to as the irreducible minimum, who would have to be brought here to a secure location, held under the laws of war, continuing under military detention, and that’s the only way we’re going to be able to close Guantanamo,” Monaco said at the Aspen Security Forum. These prisoners would be prosecuted in the military justice system or federal courts and subjected to a “supermax cell,” Monaco said. “Ultimately, that’s the way we’re gonna do it.”

“We gotta work with Congress,” she said, “but right now we aren’t even able to put that facility together because of the legal restrictions.”

Not only is it currently illegal to bring Guantanamo prisoners to the U.S. for prosecution or detention, the federal government is forbidden to spend any money to “assist” in doing so. This means no funding to build a U.S. prison to hold them, or improve an existing one, or even to perform an in-depth study on related options. This has left national security leaders to plan the future of U.S. detention while trying to avoid the appearance of spending taxpayer-funded time on options for moving detainees to U.S. soil.

Say, I've got an idea: let's have Lois Lerner and John Koskinen do all the planning for this patently illegal operation and the cover-up which is sure to follow. They appear to have all of the necessary experience.

Obama has been doing whatever he wants irrespective of whatever law he may break. Who's going to stop him? The AG he just appointed? Hahahahaa!

Obama will just relocate them to Idaho.