Tennessee is to Muslim refugees as New York is to Muslim hijacked planes. Chattanooga, the site of the latest Muslim terror attack against America, is a “preferred community” for resettlement along with Knoxville and Nashville. 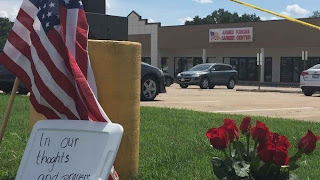 Nashville was designated a “Gateway City” for Iraqis. Hundreds of Somali Muslims were dumped in Shelbyville and the Murfreesboro Mega-Mosque became national news because of its terror ties.

Over the last decade, middle Tennessee’s Muslim population tripled.  The rise of Islam in Tennessee as Muslims from terror zones like Iraq and Somalia flooded its towns and cities brought hate and violence.

In Memphis, Imam Yasir Qadhi was caught on tape calling Jews and Christians filthy and declaring that Muslims can take their lives and property.  Last year the FBI warned of an ISIS threat in Memphis.

This year it was Chattanooga’s turn.

Muhammad Youssef Abdulazeez, the son of a Palestinian man and a Kuwaiti woman living in the United States, killed four marines. One of his targets, a recruiting center, was a gun-free zone. Those inside had no way to defend themselves. Their government had welcomed in the enemy and left them unarmed and helpless against his Jihad.

Obama refused to use the word “Terrorism”. Hillary Clinton claimed that the attack was “senseless violence.” But there was nothing senseless about it. It was an act of war, one of many, in a conflict that stretches back to the founding of the United States of America.

The Marines first saw action abroad against the Barbary states who informed Thomas Jefferson and John Adams that they were entitled to attack American ships and enslave American sailors because, “it was written in the Koran, that all Nations who should not have acknowledged their authority were sinners, that it was their right and duty to make war upon whoever they could find and to make Slaves of all they could take as prisoners, and that every Mussulman who should be slain in battle was sure to go to Paradise.”

This is the “sense” behind Hillary’s senseless violence.

The last of the Barbary Wars ended on a July, two hundred years ago, with an American victory. Two hundred years later, Marines are murdered by the barbarians we invited into our own country.

As the government began filling it with immigrants from terror zones, Tennessee, the Volunteer State, fought back because it hadn’t volunteered for this.  In 2008, it pulled out of the Federal refugee resettlement program. But the resettlement continued. Tennessee taxpayers suffer and bullets fly.

Three days before the latest terror attack, Muslims in Chattanooga protested in support of Islamberg, a New York outpost set up by Mubarak Ali Gilani, who has said, “We are fighting to destroy the enemy. We are dealing with evil at its roots and its roots are America.”

That is what we are dealing with. Three days before a Muslim terrorist attack, supporters of Muslim terrorism were playing the victim. Their victimhood theater was aided and abetted by the media.

Every time the citizens of Tennessee attempted to stand up to terror immigration and the Murfreesboro Mega-Mosque , they were shouted down, smeared and lied about by the media. A day from now, the media will have shifted the focus of the story from the murdered Marines to local Muslims whining about the backlash. The perpetrators become the victims and the victims become the perpetrators.

It is all but certain that we will hear less about the stories of the heroes who died in Chattanooga  than we did about the Muslims killed in a parking dispute in Chapel Hill. Because Muslim lives matter and Marine lives don’t.

For that matter we will probably hear less about them than we did about the tragic tale of Tahera Ahmad’s opened Diet Coke because Muslim sodas also matter more than dead Marines.

Tennessee has not been allowed to stop the dumping of Muslim settlers in its borders because Muslim immigration matters more than the families of Tennessee. Instead if we do nothing Chattanooga will go on being a “preferred community” for the transformation of the country. More Americans will die and after every terror attack, the media will dig up another Imam complaining how afraid he is of a backlash.

If we really want to stop terrorism, the place to start is at the airport.  Not with TSA groping and scanners, but by ending the constant flood of terror populations into the country. The attacks of September 11 would never have happened if the United States hadn’t gotten into the habit of allowing in Saudis who couldn’t even be bothered to produce plausible paperwork. The World Trade Center bombing would not have happened if we hadn’t gotten into the habit of setting illegal immigrants loose.

The United States of America faces a simple choice. We can fill our towns and cities with populations from terror zones and then act surprised when they kill us, or we can shut the doors on them.

Inviting in the world’s terrorists to live here is not an act of kindness. Both Nidal Hasan, the Fort Hood killer, and Muhammad Youssef Abdulazeez, the Chattanooga terrorist, were born to Palestinian Arabs. Their background was in a culture where terrorism is so widely accepted that it has become a way of life. The Americans they murdered would be alive today if we had a pro-American immigration policy.

It’s not just the people who send checks to terrorist groups who should be called terrorist supporters. Those who support the migration of terrorists into this country are the biggest terrorist supporters because without them most of the attacks we have experienced would not even be possible.

No war can be won as long as the enemy continues to gain fresh recruits. Every immigrant from a terror zone to this country is a potential terrorist making the War on Terror completely unwinnable.

We can end the bombings and the shootings. We can get rid of the TSA and the NSA. All we need is an immigration policy that puts the safety and security of Americans first.

The terrorist attack in Chattanooga will be swiftly swiped from the media’s digital pages with another story about celebrity misbehavior or a manufactured controversy. But it can become a wake-up call. The dumping of refugees in Tennessee must end. And it’s time for Chattanooga to stop being a preferred community for importing the terror zones of the world to Tennessee.

Every terrorist attack has the potential to wake the sleeping giant against the terrorists and those who have infiltrated them into this country in the name of human rights, humanitarianism and diversity.

The war keeps coming home because we have filled our home with the enemy. It’s time we clean house.

Don't dump on Obama.....just cuz He hates WASPs.....America's eeeeeeeevil history......and because He's a Trotskyite.
He is merely welcoming His Islamic cousins to the country that He detests.