DEMOCRAT POLICIES WORK! Which country is out of food, pays doctors $15 a month, and has no beer?

Venezuela used to have oil literally coming out of the ground. Then the Socialists took over and under Hugo Chavez made it a model for the world... to run away from. Here's what's going on in Venezuela now. 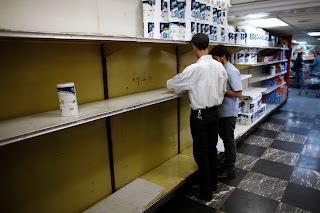 In some hospitals, they had less than a third of the medical supplies they require. Almost every patient told me they had to buy at least some of their drugs on the street.

Oncologists said that people who were diagnosed with breast cancer sometimes had to wait more than 18 months for treatment, while surgeons said that other patients often die while waiting for operations.

It's not just a lack of medicines that is making life difficult. Spiralling inflation, which topped 600 percent in July 2015, has meant that doctors' salaries are now worth less than £10 per month.

It’s taken what, no more than a couple of decades, to turn an oil rich middle income country into something worse than most sub-Saharan economic wastelands (the minimum manufacturing wage in Ethiopia is currently $21 a month or so).

Minimum wage in Venezuela is now about $11 a month. But that's okay because there's no food to buy so the government is just confiscating it from farmers, Bolshevik style.

A food industry group said Monday that Venezuela's government has ordered companies to distribute food staples to a network of state-run supermarkets amid chronic shortages of basic goods.

Federal authorities ordered producers of milk, pasta, oil, rice, sugar and flour to supply between 30 percent and 100 percent of their products to the state stores, he Food Industry Chamber said.

In an attempt to subdue out-of-control inflation, the Venezuelan government now forces companies doing international business to use U.S. dollars instead of the Venezuelan bolivar. There’s just one problem: falling oil prices now mean that U.S. dollars have become few and far between. That’s creating a real crunch for Venezuelan companies like breweries, who must buy U.S. dollars in order to do business with foreign markets or import goods into the country.

The Venezuelan government has failed to give enough U.S. dollars to companies even to import many basic goods, such as chicken, beef and toilet paper, Rueda writes. And in just a few weeks, beer might join that list as well.

Local brewers are already struggling to make ends meet. The industry owes about $200 million to foreign suppliers, Rueda writes, and industry leaders are warning of a crisis that could cost the country over 400,000 jobs.

Even the black market won’t help solve the beer shortage, where the going rate for a dollar is more than 600 Venezuelan bolivares. That’s almost three times the highest rate that companies can buy dollars from the government, Rueda writes.

Maybe they can start paying for those beers in Zimbabwean money.

Under Mugabe, the price of an egg rose to 50 billion Zimbabwean dollars and a beer hit 150 billion dollars because Mugabe had the same idea of economics as Obama and Paul Krugman; just print more money.

But don't crack any jokes about it.

Standup comics here say they have no shortage of material: the president claims to have talked to a bird, one political candidate said Tylenol grows on trees and, amid shortages of a key bathroom staple, the National Guard occupied a toilet paper factory.

But using such absurdities in comedy sketches is getting harder amid a government clampdown on political satirists.

Some humorists have been blacklisted by state-run theaters and hotels, and local governments in several towns won’t even allow them to perform. Comedy programs that poke fun at the government have disappeared from Venezuelan TV. A few humorists have given up and moved abroad.

Laureano Márquez, for example, focuses on the strangeness of daily life in an oil-rich country where people often can’t find milk or diapers. During a recent stand-up routine before a sold-out auditorium in his hometown of Maracay, he said the shortages have gotten so bad that instead of staring at pretty girls on the street he now longingly ogles their shopping bags.

But officials aren't amused. When Mssrs. Márquez and Lovera were scheduled for joint performances in February in the cities of Barquisimeto, Valencia and San Antonio de Los Altos, all three private venues that had booked them were temporarily closed after being accused by the central government of tax evasion. The shows were canceled, the two comedians said.

No jokes, no beer, no money, no food.  That's the left-wing utopia.