Scenes from the Government Debt Endgame

We have been warning about the 'global war on pensioners' for a while (most recently here, here, and here) but the soul-destroying images of Greek pensioners' hopes being crushed bring that central-bank-driven repression front-and-center...

As The Wall Street Journal reports, fear is growing in Greece as the decisive hour nears for the nation... 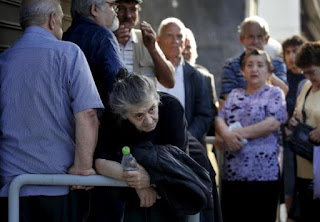 Greek banks will likely run out of cash by the end of the week, two senior Greek bankers said.

“Not all banks will run out of cash at once,” one of the bankers said, “but they’ll all be out within hours of each other.”...

Shortages of medications are beginning to bite, compounding distress especially among older Greeks.

Parents of babies and young children are stocking up on formula and other basic medications, pharmacists say.

“In some cases, we have shortages because people are freaking out panic-buying. We’re trying to advise them against that,” said Mando Nikolopoulou, a pharmacist.

“We’re seeing significant shortages in heart and blood-pressure medications, but I’m less worried about that because there are Greek-made generics that people can turn to when the branded ones run out for good,” she said. “But insulin, that’s critical—diabetics need it to survive, and we’re really low on stocks.” ...

Yiannis Konstantinidis, a 74-year-old grandfather to two little girls, refused to join the queue, even though he could have done with an extra €60 ($66)—the maximum daily withdrawal amount under capital-control rules.

“I brought the kids to have a bit of fun, to buy them ice cream,” he said as 6-year-old Chryssa pulled on his hand. “They may be young but they know something’s wrong. The television is playing at home all day, there are people lining up at the banks, they’re asking me ‘what’s happening, Grandpa?’”

“I just want Tsipras to get a deal, any deal, but it looks like the Europeans are fed up with us now,” Mr. Konstantinidis said, adding he had voted with the minority of Greeks who backed the creditors’ proposals, which he believed would secure the country’s euro membership despite hitting pensioners like himself hard.

Scenes from a dying nation...

All mainstream news is painting the Greeks as the bad guys and the Troika as the savior of Europe. Quite frankly, it is really disgusting. Pictures of an elderly Greek pensioner have gone viral depicting what the Troika is deliberately doing to the Greek people trying to punish them for their own failed design of the Euro in a system that is just economically unsustainable.

[The images above] expose the core of the issue of how ordinary Greeks are being tormented by EU politicians who pretend to care about people. This is not a Greek debt crisis, this is a Euro Crisis and they refuse to admit that what they designed was solely for the takeover of Europe at the cost of the future of everyone from pensioners to the youth.

This is just the tip of the iceberg. We are facing terrible times ahead because socialism is completely collapsing. Government employees have lined their pockets and this is precisely the end game how Rome collapsed. It was not the barbarians at the gate. It was the the Roman army was not paid and they began hailing their various generals as emperor and the attacked cities who did not support their choice sacking their own people. Only after weakening themselves, then the barbarians came in for easy pickings. If Russia really wants to take Europe, all they have to do is be patient. They will self-destruct for the Troika cannot see any change in thinking for that means they must admit that they were wrong from the outset.

Sooop...Zeropa got rolled once more by the greeking Greeks....Sweet deal between socialists...get hundred of billions and never pay back a nickel...