OBAMA: Burn Down the Suburbs!

For years, the cities have been robbing the suburbs but they now have a scheme that will quickly end in a takeover of the suburbs by a leftist federal government. 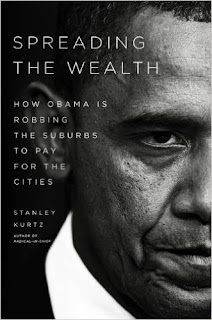 HUD announced enforcement of its new 377-page rule called the Affirmatively Furthering Fair Housing Rule which will allow them to move people from poor crime-ridden areas into “wealthy” suburbs. It was announced by leftist Julian Castro Monday. The rule has force behind it. Federal monies will be withheld and lawsuits accusing residents of racism will be filed. Any town that takes federal funds will be transformed.

It is not only forcing unnecessary racial integration, its forcing class integration and the destruction of the local governments who will officially become satellites of the urban areas. Neighborhoods will be diversified according to income levels. The plan is to make us into a classless society of the type Karl Marx promoted.

With this rule, HUD will have control of zoning, transportation, and education and, in the end, the politics. Just as the leftists took over the cities one-by-one, they will be able to consume the suburbs only at a far more rapid pace. This can be done on a massive, almost immediate scale.

Using racism and ecology as excuses, Obama is orchestrating, through HUD and the EPA, the end of local government rule.

They want more “density” in population, the elimination of urban and federal boundaries, and they plan to make every neighborhood “diverse” by spreading the criminals around.

The New York Times had an interesting take, saying this rule will put an end to financial ghettos. What they don’t say is they are doing it by redistributing all resources of suburbia, even residents’ living arrangements by forcing people from the ghettos into “wealthy” suburbia.

We should soon be seeing the environmental laws currently present in liberal areas become a matter of fact for every town in the country. In leftist bastions, even cul-de-sacs are banned by planners.

This has gone under the radar. The media is ignoring it.

Westchester County Executive Rob Astorino has been fighting it in Westchester, which is a test case. Liberal Westchester voted Conservative Astorino into office to stop it. In Westchester, HUD said a quarter-acre lot is discriminatory. They want all limits removed. Your home could end up next to a factory under their plan. Right now zoning rules protect inhabitants but the federal government will take away those protections.

Listen to an explanation by Mr. Astorino:

Baltimore County and the entire state of Maryland is currently a test case with the racism argument used as a weapon.

“Smart growth” advocates are forcing dense development in suburban and rural areas to curb suburban growth. They claim the suburbs are stealing jobs and wealth from the urban areas.

The cities have been siphoning tax revenues from the suburbs for years, but this rule takes redistribution much further, it allows the federal government to simply take over.

Stanley Kurtz of National Review Online penned an article back in August, 2012 titled Burn Down the Suburbs? In it, he wrote about Obama and his community organizer mentors who hold the view that the cities suffer because of taxpayer “flight” to the suburbs.

Obama lived that belief as a community organizer. He channeled large sums of money from left-wing Chicago foundations where he served on the Board of Directors to anti-suburban activism.

He allied with one of his original trainers, Mike Kruglik, who has an organization called Building One America. It’s the anti-suburban crusade on steroids. They work with the Obama administration.

Kruglik and his colleagues in the movement have met with Obama in the White House. They literally plan to burn down the suburbs.

The suburbs could easily become the neo-slum complete with crime and poverty. It does undermine the minorities currently living in suburbs who fled the liberal cities that have been crushed under the weight of decades of corruption and bad policies. For example, only 16% of Detroit’s blacks live within the city limits.

Politically, Democrats have become less competitive in the suburbs so they’ve taken the next step. The federal takeover of suburbia will be accompanied by the loss of the American Dream of home ownership, raising oneself up the social and economic ladder, and even the right to own and drive a car. The extreme environmentalists want you out of your car.

LaRaza and other far-left groups strongly backed the rule which will likely end up forcing towns and cities to accept illegal immigrants among other “protected” classes of people.

LaRaza said that “Hispanic families often do not know their housing rights and have cited fear of deportation as reason for not reporting rights violations.” The majority of people who fear deportation are illegal, unskilled, poor, welfare recipients and they are coming into this country in the hundreds of thousands each month.

We see “refugees” from foreign lands being poured into towns and cities throughout the country. When towns resist, they are labeled “pockets of resistance” and the Soros “Welcoming America” groups come in to pressure the local politicians. More information can be found at Refugee Resettlement Watch.

Illegal immigrants and refugees are being used to re-populate areas throughout the country to establish their one-party majority. Many are sent into suburban and rural areas. Their goal is a country within a country of foreigners who will be indoctrinated and eventually be ready to takeover the remaining traditional citizens.

The days when Democrats supported suburbia are long gone and they have launched a full-out war against them without people even knowing it’s happening.

This rule passed two years ago in 2013 but it is only being enforced now because Obama wants to slip it in under the radar.

Congress is supposed to pass laws this comprehensive in scope -- not HUD. But, I guess that was when we followed the Constitution -- NOT since the "fundamental transformation of America."

When will Congress start acting like it has the power of the purse? They need to prevent any fundings from being appropriated or used in any way whatsoever to fund this HUD program.

In WA State, mandated low rent housing in rural areas has resulted in packs of feral yutes taking midnight walks past previously secure homes. One business owner who "lives above the store" was mad a hell about it saying, "looking is stealing".
These new Choom Gang Rules typically effect white people who are just getting by but enjoy pride of community and home ownership. The Obamas don't drive by these places as they spend our 10 million dollars a year on vacations.