Obama Trusts a Terror State, But Not the American People

It’s disturbing to witness the collapse of logic, especially when perpetrated by our own president. After all, if we were to believe what so many of his devotees claim prima facie, he’s among the smartest on the planet. But his nuclear deal with Iran proves to the contrary; not just by its terms, but his illogic in support of it. 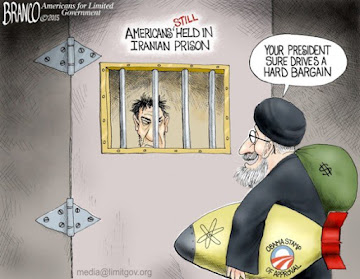 President Obama said this week, with regard to the agreement inked with Iran, “There really are only two alternatives here. Either the issue of Iran obtaining a nuclear weapon is resolved diplomatically through a negotiation or it’s resolved through force, through war. Those are—those are the options.” There are so many more options available, that even he should be aware of, yet he’s reduced to employing the common false dichotomy, or fallacy of bifurcation, in support of it. But it explains his inanity in signing a deal that all but assures a nuclear Iran in the foreseeable future, and further underscores why Obamacare was foisted upon the nation; to him, there are but two options – his way or no way at all.

Obama added that no better deal was or is possible than the one he has negotiated. Since the bargaining table was approached from a position of weakness, acquiescence, and appeasement, he’s likely correct. But if the process had been approached from a position of strength, like Reagan did with the Soviet Union at the height of the Cold War, then the final agreement would have been much more inhibiting to Iranian nuclear ambitions, and we, and our allies, could have come away from the negotiations feeling much safer and assured.

Then he had the temerity to claim that “99% of the world community” agrees with him. Now watch, that fabricated percentage will become his new selling argument to the Senate as they consider the final agreement, much like the fake and discredited claim of “97% scientific agreement” on manmade climate change.

Obama has claimed that this deal was necessary at this time since the U.S. initiated economic sanctions were not working. Actually they were working. According to the Wall Street Journal, “Iran had an official inflation rate of some 35%, its currency was falling, and its dollar reserves were estimated to be down to $20 billion. Mr. Obama had resisted those sanctions, only to take credit for them when Congress insisted and they began to show results in Tehran.”

The WSJ editorial continued, “Yet Mr. Obama still resisted calls to put maximum pressure on Iran. He gave waivers to countries like Japan to import Iranian oil. He was reluctant to impose sanctions on global financial institutions that did business with Iran (especially Chinese banks that offered Tehran access to foreign currency). The U.S. could have gone much further to blacklist parts of Iran’s economy run by the Revolutionary Guard Corps. A bipartisan majority in Congress was prepared to impose more sanctions this year, but Mr. Obama refused as he rushed for a second-term deal.”

All one has to do to ascertain the perceived victors from the now concluded negotiations, is observe reactions by the effected nations. Spontaneous celebrations broke out in Iran, while even Democrat senators bemoaned the terms of the deal. Israel’s Prime Minister voiced perhaps the most logical response. Benjamin Netanyahu, said of the agreement, “Iran is going to receive a sure path to nuclear weapons. Many of the restrictions that were supposed to prevent it from getting there will be lifted,” and called the agreement a “historic mistake.”

Even Obama conceded that the agreement doesn’t prevent Iran from developing a nuclear bomb, but only delays it. In a July 14th interview with NPR (National Public Radio), the president said that Iran’s uranium enrichment would be capped for a decade at 300 kilograms, which is not enough to convert to a stockpile of weapons-grade material. He then revealed, “What is a more relevant fear would be that in Year 13, 14, 15, they have advanced centrifuges that enrich uranium fairly rapidly, and at that point, the breakout times would have shrunk almost down to zero,” Obama said. The “breakout time” refers to how quickly uranium enrichment for power can be converted to unabated enrichment for nuclear weapons.

The inspection protocol elicits no confidence whatsoever. In spite of Deputy National Security Adviser Ben Rhodes’ assurance just three months ago that, “In the first place we will have anytime, anywhere access [to] nuclear facilities,” the agreement grants a 24 day time table for Iran to dispose of evidence before an inspection can occur. That’s like giving drug cartels three weeks notice that a suspected drug manufacturing site will be raided!

Nearly as disturbing, is the provision that lifts the U.N. arms embargo against Iran. After five years Iran’s thirst for conventional arms can be sated, and their hunger for ballistic missile programs satisfied in eight years. So in five years, Iran can buy all the weapons it wants, for its own defense or the terrorist organizations they bankroll, like Hezbollah, and in eight years they can have a fully funded ICBM program. And in 13 years they can have a functional nuclear warhead to adorn their missiles. Now isn’t that assuring?

The President also claimed that “no one has presented any alternatives” to his plan. All I can say is, it must be nice to live in a vacuous tunnel where the only voice one hears is their own, and those who echo his! If negotiations had been approached from a position of strength, we would have four Americans on the way home, rather than continuing to languish as political prisoners in Iranian prisons. And we could have required that not a single Rial of the $150 billion of Iranian deposits freed up from U.S. banks, could be used to support terrorist activities and Hezbollah. There were many, many more options than the one Obama settled for.

The Iranian nuke deal comes down to a matter of trust. Can Iran be trusted to curtail their nuclear ambitions and abide by the diluted impositions on their aspirations, and can the president be trusted in representing our interests in securing our national security. The answer is clearly an emphatic “no,” on both counts.

Valerie Jarrett.
I'm not sure why Obama doesn't just GIVE Nuclear weapons to Iran?
Remember the good old days of MAD? (That's mutually assured destruction,for you kids out there..google it.)
Learning how to duck and cover in the first grade class room with Sister John Susan during the Cuban Missile Crisis. It seemed we were well on our way towards some sanity after the collapse of the old USSR and those countries were more than willing to trade nukes for cash. They were rational people. Unfortunately we are not dealing with rational people in Islamists. They have announced plainly, clearly that they seek to wipe us off the earth and our leaders refuse to take them seriously. If Iran gets nukes,they'll be used. either by the regime or by their proxies. You watch. Back to digging bunkers in our yards I guess. those of us lucky enough to have a yard. Back to worrying about "The Balloon" going up again. I'd hoped our kids would never have to live like that but thanks to the Obama administration the Doomsday Clock edges closer to :30.