HEY, IT’S A TERRORISM FUNDRAISER! Iran Gets $100 Billion When the Obama-Kerry Nuke Deal is Signed

Fars News Agency released what they say are the full contents of the Iran-powers 159-page deal with annexes. The deal lifts more than $100 billion in sanctions almost immediately in exchange for promises and efforts on the part of Iran. The U.N. can ask to inspect new sites and military sites but in reality there are no inspections. None of Iran’s infrastructure will be dismantled. 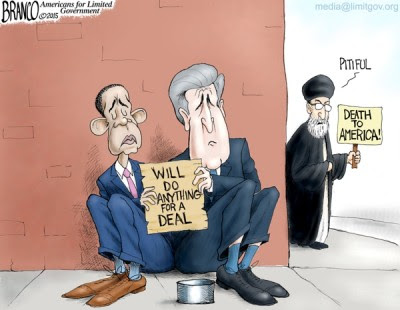 Iranian Foreign Minister Javad Zarif said, “now we are starting a new chapter of hope.” It is a deal resting more on hope and promises than requirements.

One thing people must realize is that the P5+1 consists of China and Russia, Iran sympathizers, and the remainder are European countries – England, France and Germany – dependent on Russia for their oil.This agreement is, in other words, between the U.S. and Iran with the U.S. lawyers acting as Iran’s agents throughout the negotiations.

Based on the agreement, the world powers recognize Iran’s civilian nuclear program, including the country’s right to the complete nuclear cycle. In other words, they can continue to enrich uranium in limited amounts, insufficient for a nuclear weapon for 10 years, and nuclear development is now their human right. There will be almost no oversight.

Iran sees the acceptance of extensive Iranian nuclear infrastructure and continued nuclear activity as necessary to its existence, and they get to keep it.

U.N. inspectors can press for visits to Iranian military sites as part of their monitoring duties to use the exact phrase from the deal, something the country’s supreme leader, Ayatollah Ali Khamenei, had long vowed to oppose. Iran can appeal such a request to the arbitration board (JCPOA) and the five powers, including Russia and China, get to decide.

The arbitration is so bureaucratic and so Byzantine, Iran can easily cheat.

The UN sanctions against Tehran, including all economic and financial bans, will be lifted at once under a mutually agreed framework and through a new U.N. resolution. This amounts to about $100 to $150 billion which they can use to further their current terrorist activities in the region which will not be used to build hospitals and schools.

The U.N. arms embargo will be lifted first for defensive weapons (within five years), then offensive weapons. (They are currently building long-range missiles that will one day reach the United States. Technology only to Tehran will be limited for 8 years.)

Washington had sought to maintain the ban on Iran importing and exporting weapons, concerned that an Islamic Republic flush with cash from the nuclear deal would expand its military assistance for Syrian President Bashar Assad’s government, Yemen’s Houthi rebels, the Lebanese militant group Hezbollah and other forces opposing America’s Mideast allies such as Saudi Arabia and Israel.

Iranian leaders insisted the embargo had to end as their forces combat regional scourges such as the Islamic State. And they got some support from China and particularly Russia, which wants to expand military cooperation and arms sales to Tehran, including the long-delayed transfer of S-300 advanced air defense systems – a move long opposed by the United States.

Some of Iran’s nuclear stockpile will be sold internationally, other parts will be diluted, and the rest converted into fuel.

The final nuclear agreement will allow UN inspectors to push for visits to military sites in Iran, which could, however, be challenged by Tehran. The arbitration board JCPOA will have the final say. It will allow resolutions to take years for a decision.

Sanctions will never be implemented again without going through a long dispute resolution process provided for under JCPOA with Russia and China having the right to stop them. The Iranians can do their customary feet-dragging indefinitely with the time-consuming, drawn-out process they established.

In essence, this means sanctions appear to be eliminated as a means for sanctioning the rogue, terrorist nation.

The sanctions and other restrictive measures will be lifted while Iran will make every effort to support the successful implementation of the JCPOA – they’ll try!

27.The E3/EU+3 and Iran commit to implement this JCPOA in good faith and in a constructive atmosphere, based on mutual respect, and to refrain from any action inconsistent with the letter, spirit and intent of this JCPOA that would undermine its successful implementation. Senior Government officials of the E3/EU+3 and Iran will make every effort to support the successful implementation of this JCPOA including in their public statements[2]. The E3/EU+3 will take all measures required to lift sanctions and will refrain from imposing exceptional or discriminatory regulatory and procedural requirements in lieu of the sanctions and restrictive measures covered by the JCPOA.

We are even removing sanctions on 800 evil individuals who were sanctioned for cause.

The sanctions were working. Iran’s economy was near default.

The Sunni Arab nations have vowed to develop their own nuclear weapons upon signing of this agreement.

The deal has to be approved by Congress but Obama claims its an agreement not a treaty and he does not need congressional approval. The Corker bill to stop it can’t stop it and actually took away Congress’ treaty ratification rights.

Prime Minister Benjamin Netanyahu furiously denounced a deal to limit Iran’s nuclear program on Tuesday as a “historic mistake for the world,” accusing the United States and five other global powers of making “far-reaching concessions” in order to achieve an agreement “at any price,” The Times of Israel reported.

Speaking before a formal announcement of the deal, Mr. Netanyahu said that initial reports indicated that the concessions were made “in all areas that were supposed to prevent Iran from obtaining nuclear weapons capability.”

“In addition,” he said, referring to the expected lifting of sanctions, “Iran will receive hundreds of billions of dollars with which it can fuel its terror machine and its expansion and aggression throughout the Middle East and across the globe.”

As an aside, none of our prisoners in Iran will be released as a condition for this deal.