Why, of course they do. Who is the only candidate that Hillary Clinton can beat? Uhm, Joan, that would be Jeb "Call me Jeb!, not Bush" Bush: 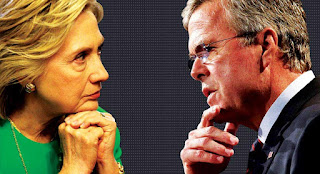 Behind a garden modeled on Monet's, Jeb Bush addressed a lawn-full of chief executives and hedge-fund managers at an East Hampton, New York, estate Saturday morning. While the candidate is no stranger to courting wealthy donors, this time was different: about half the attendees were Democrats.

"This guy sells well," said Kenneth Lipper, the money manager and registered Democrat who hosted the event, after Bush left. Virtually the only one who left without writing a check, Lipper said, was a buck deer that wandered past the group assembled on the wooded grounds...

...In some ways, the Hamptons are Hillary Clinton territory. The Democratic candidate and her husband have often rented summer homes here, and it's popular with movie stars and entertainers who tilt liberal. Suffolk County favored Democrats in the last three presidential races.

But Lipper estimated that the crowd of about 70 at his event was almost evenly split between the parties, and virtually every one of them donated to Bush. Lipper, 74, said he introduced Bush as the candidate who will "bring unity and civility to the process." He was impressed when Bush started his visit by introducing himself to Lipper's kitchen staff.


How dim do you have to be to believe that Jeb! can win a general election against any Democrat?

How's that Bush brand name doing? Is Common Core suddenly popular? How about illegal immigration in the wake of Kate Steinle's senseless murder?

Friends, this is a course called False Flag 101, and Jeb Bush is the subject. As well as the antithesis of an electable candidate for the GOP.

Remember, friends: The Democrats will give you international strife, rampant crime, out of control inflation, oppressive laws and regulations, and pervasive social discord, but the Republicans can do it cheaper!