CHART: The greatest achievement in human history, brought to you by free market capitalism

Pope Francis has been excoriating capitalism lately, blaming it for causing global injustice and climate change, and even comparing the excesses of unfettered capitalism to the “dung of the devil.” The pontiff’s strong anti-capitalism message reminded me of the accompanying chart. 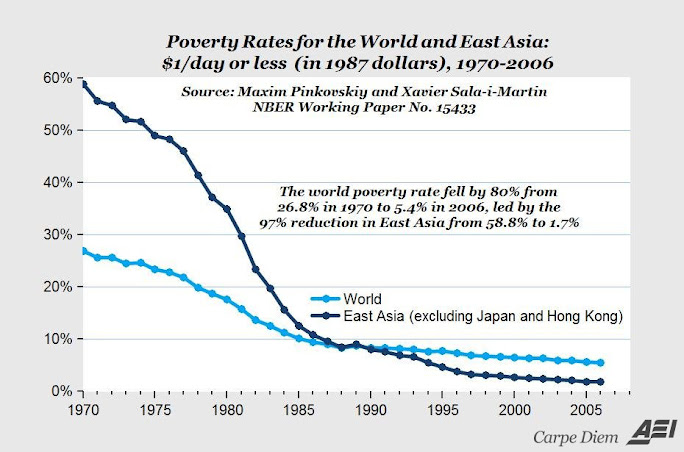 In a CD post in 2013, I suggested that a slightly different version of the chart could perhaps qualify as the “chart of the century” because it illustrates one of the most remarkable achievements in human history: the 80% reduction in world poverty in only 36 years, from 26.8% of the world’s population living on $1 or less (in 1987 dollars) in 1970 to only 5.4% in 2006 (light blue line), led by the 97% reduction in the poverty rate in East Asia (excluding Japan and Hong Kong) from 58.8% to 1.7% over that time period.

The data in the chart come from a 2009 NBER working paper “Parametric Estimations of the World Distribution of Income,” by economists Maxim Pinkovskiy (MIT) and Xavier Sala-i-Martin (Columbia).

What accounts for the greatest achievement in human history that you never hear about, and which provides some counterbalance to the anti-market message of Pope Francis? AEI president Arthur Brooks explains in the video above, summarized below :

It turns out that between 1970 and 2010 the worst poverty in the world – people who live on one dollar a day or less – that has decreased by 80 percent (see chart above). You never hear about that.

It’s the greatest achievement in human history, and you never hear about it.

80 percent of the world’s worst poverty has been eradicated in less than 40 years. That has never, ever happened before.

So what did that? What accounts for that? United Nations? US foreign aid? The International Monetary Fund? Central planning? No.

It was globalization, free trade, the boom in international entrepreneurship. In short, it was the free enterprise system, American style, which is our gift to the world.

I will state, assert and defend the statement that if you love the poor, if you are a good Samaritan, you must stand for the free enterprise system, and you must defend it, not just for ourselves but for people around the world. It is the best anti-poverty measure ever invented.

I would argue that free market capitalism, American style, has done more to reduce world poverty than any anti-poverty efforts of the Catholic Church and the Vatican. In fact, I would even argue that just one free-market capitalist corporation – Walmart – might even do as much, or more, to alleviate poverty by providing everyday low prices and jobs for hundreds of thousands of low-income people than the anti-poverty efforts of the Catholic Church in the countries where Walmart operates (US, Mexico, Guatemala, Nicaragua, Brazil, Argentina, Chile, India, China, and nine African countries). In addition to reducing poverty with low-cost groceries, clothing and household goods, Walmart improves the lives of underserved individuals and communities with $1.4 billion in charitable giving every year, which is almost $4 million every day!

Pope Francis needs to take a permanent sabbatical, join a monastery, take vows of silence, and/or go off into a desert cave and become a recluse.

I think the Pope needs to make a trip to Syria and talk to Isis.

Pope Francis needs to stop playing politics and continue cleaning up the mess in his own province.