TIME IS RUNNING OUT: Will Schumer and the Democrats Finally Step Up and Defend America?

Shortly after the November, 2014 Republican landslide we posted an article titled, “Wanted: Gutsy Dems to Rescue Our Constitution”. The piece went on to explain some of the rationale behind what appears an irreconcilable statement. Some excerpts: 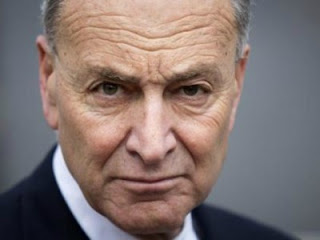 “So given the undeniable Republican ascendancy, why would they need gutsy democrats to rescue our Constitution? One, because President Obama’s clinical narcissism will not allow him to admit to either errors in policy or judgement. Two, because this delusional thinking will have him press ahead with his extra-constitutional, “pen and phone”, assault on the “supreme law” of our land. Three, because most GOP leaders, paralyzed by the president’s pigment, will likely duck a serious, principled fight….even if the very health of the Republic is at stake.”

“Sadly, to this point, aside from some lone, outraged conservative voices, the overall reaction to Obama behaving in ways Richard Nixon never dreamt, has been marked by soft commentary from Republicans and complete silence from Democrats. But now, with the dramatic shift in D.C. power, the dynamics have changed and the stakes are much, much higher. The only way for “The One” to get what he wants is to brazenly bypass an overwhelming majority in Congress….that has been duly elected to stop him from advancing his increasingly unpopular and reckless agenda.”

Nine months later, Obama’s attack on our preeminent governing document has only accelerated. While fellow party members may have enjoyed Barack’s rewriting ObamaCare, and changing immigration laws to fit their partisan needs, his handing the Iranian Nuclear Arms Deal to the United Nations before Congress has even read it, is very, very different. It puts Democrats in an extremely tough spot on a two levels.

1) Most Americans are nervous about the terms of this “agreement”, and genuine supporters of Israel are furious. Dems who enjoy sizable Jewish campaign contributions or constituencies will have to do some heavy spinning if this turkey winds up flying. Additionally, as haughty Iranians continue their arrogant taunting, and details of an extremely dangerous “deal” filter out, political blowback will quickly spread to virtually every demographic group living in incumbent Democrat districts.

2) We have the president, once again playing “word games” so he can shamelessly circumvent the Constitution. Obama calls this an agreement, not a treaty. That little semantic slight of hand spares him the constitutional requirement of needing two-thirds of a GOP-controlled Senate to approve something most know is an international catastrophe waiting to happen.

Which brings us to the U.S. Senator from New York, Charles (Chuck) Schumer, and his fellow Democrats. Chuck touts himself as one of Israel’s strongest congressional allies. He’s also considered the most powerful Dem in the Senate, making him a natural to assume Harry Reid’s leadership spot. But now he and his colleagues have a momentous decision to make. Will they cast a vote to gain favor with an increasingly imperial, iron-fisted, delusional president or adhere to their oath of office?

Schumer, a fiercely ambitious showboater, has always sought this kind of stature. But presently his standing comes with the kind of historic, pivotal decision that separates statesmen from partisan, political hacks. Which way will Chuck go and how hard will he try to influence his “flock”?

Last November we said,“After this “wave election”, much of the mainstream mantra has been Republicans and Democrats need to work together to pass much needed legislation. That may be half right. Dems and GOPers need to get together all right, but their focus should be on preventing an egotist president, increasingly out of touch with reality, from continuing his assault on the Constitution.”

Will Schumer and the Democrats finally, if belatedly, stand up for the supreme law of our land?

Or will they seek, once again, to ingratiate themselves with a president who cares little about them, Israel or the Constitution? Time is running out.