#IranDeal: David French has one simple, brutal question for Congress

Writing at National Review, David French has a gutwrenching assessment of the Obama-Iran Suicide Pact: 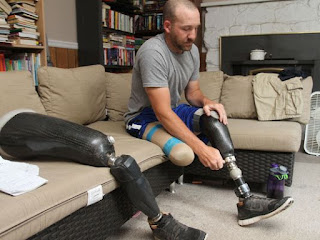 Yesterday, in the immediate aftermath of the Iran deal announcement, I posted a short comment noting that Iran is responsible for more than 1,000 American military deaths since 9/11. That’s just a number, but for many of us those numbers have names — the names of men we knew. I will never forget the horrible days in March and April 2008, when Iranian-made IEDs periodically closed even the main supply route into our small forward operating base. I’ll never forget the hero flights, standing at attention as brothers carried the still bodies of their fallen comrades to waiting Blackhawk helicopters. And I won’t forget about the people who are even now learning to walk, and eat, and live again — recovering from horrific wounds. Yesterday, I got an angry message from a friend from my Iraq deployment, a man whose vehicle was destroyed by an Iranian-made IED. Some of the blood on Iran’s hands is his own.

The American people need to clearly understand what their president has done. He’s granting billions of dollars in sanctions relief to a nation that put bounties on the heads of American soldiers. Iran isn’t ending its war against America. It’s still working — every day — to kill Americans, including the Americans Barack Obama leads as commander-in-chief of our armed forces. There is no honor in this agreement. Moreover, there is no honor in leaving innocent Americans behind — to rot in Iranian prisons — so that President Obama can declare peace in his time. Compared to rewarding killers and turning its back on innocent American prisoners, the Obama administration’s lies about the negotiations are a small thing indeed. After all, dishonorable people do dishonorable things.

Every member of Congress should be made to answer this question: Do you believe in rewarding regimes that place bounties on the heads of American soldiers? If so, then tell the American people. But don’t tell them that this agreement brings peace, because no reasonable definition of the term includes Iran’s deadly, 36-year-long terror campaign against America and its allies.

Oh, and remember to thank Bob Corker, Mitch McConnell and John Boehner for their complicity in this prelude to genocide.

Kevin D. Williamson could not be reached for comment.

If claims made in this piece are factual, they clearly comprise providing aid and comfort to an enemy of the United States. That, my friends, is the definition of treason. His admission that yeah, they'll probably use some of it for more terrorism is proof enough that he knows exactly what he is doing, perhaps even the gravity of it - planting the seeds of WWIII.

WTF is this being tolerated? Is the media become the Sergeant At Arms?

Opposition? Paralyzed, frozen in their tracks like a deer in the headlights, by the first black president. I don't care if he's green with stripes and polka dots. All enemies, foreign and domestic, my butt.

Something MUST be done to stop this agreement. It is insanity. What in the hell is wrong with our elected officials? Boehner, McConnell - they are eunuchs. Completely useless cowards.

Obama should have been impeached long ago.