TRUMP IN 2008: "Bush Is Evil, We Need to Talk to Iran, Obama Cannot Do Worse Than Bush"

Jim Geraghty reminds us that Donald Trump has been a conservative for "all of about ten minutes": 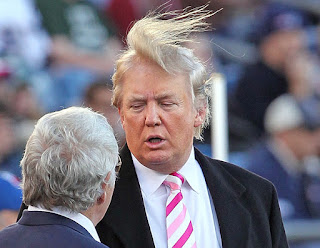 Permit me to remind you about Donald Trump’s assessment of President Bush back in 2008:

Bush has been so bad, maybe the worst president in the history of this country. He has been so incompetent, so bad, so evil, that I don’t think any Republican could have won.

You know, you can be enemies with people, whether it’s Iran, Iraq, anyplace else and you can still have dialogue. These people won’t even talk to him. It’s terrible.

Wait, there’s more! Check out his assessment of Obama!

TRUMP: It’s very exciting we have a new president. It would have been nice if he ended with a 500 point up instead of down. It’s certainly very exciting.

His speech was great last night. I thought it was inspiring in every way. And, hopefully he’s going to do a great job. But the way I look at it, he cannot do worse than Bush.

KING: So you believe, then, it’s an entitlement of birth?

And then, as you probably saw, Trump’s post-2012 comments on illegal immigration:

“Republicans didn’t have anything going for them with respect to Latinos and with respect to Asians,” the billionaire developer says ... Romney’s solution of “self deportation” for illegal aliens made no sense and suggested that Republicans do not care about Hispanics in general, Trump says.

The GOP has to develop a comprehensive policy “to take care of this incredible problem that we have with respect to immigration, with respect to people wanting to be wonderful productive citizens of this country,” Trump says.

Yet I see people comparing Trump to Reagan. Donald Trump has been a conservative for about ten minutes.

Trump is, if nothing else, a useful foil for the insane policies of Jeb "They're doing it for love" Bush.

Trump's policy prescriptions -- that vary from libertarian to totalitarian depending upon the day of the week -- disqualify him from any serious consideration. In fact, Trumpster's most recent comments serve only to call attention to the very real problem of open borders.

A more serious -- and principled -- version of Trump is, of course, Ted Cruz, the only candidate whose candidacy paralyzes both parties' leaders with butt-clenching spasms of fear.

Washington Ruling Class establishment GOP will do anything they can to discredit Trump..... It will not work asssholes
In 2014 GOP got a landslide win .. what did they do with a republican Congress ????
Vote for funding Obama illegal amnesty , funding fully obamacare ,pass a mega pork budget ,voting for everything Obama wanted.. but not what voters wanted
GOODBYE RINO GOP in 2016 !!!!!!!!!!!!!!!!!!!!!!

Who piss off the most the demon-rats, the homo mafia, the hippie druggie, the RINOs
and the communists? Donald Trump...he got my vote so far...who care what he said a million years ago?

Waaaah. You wanted fight, spunk, say it and mean it. Now you've got it!

If conservatives want to apply the same purity standards to anyone not running as a Democrat that liberals apply to everybody else, have at it. I don't know what purpose it serves, but functionally such malarkey neuters any unity, however thin, that can be put together.

Choose your targets carefully. Trump doesn't need anyone's money, and the more snark he gets from any angle, the more attention he gets, the more support, and the bigger the crowds. The battle against the Establishment is basically: we're surrounded. Don't make yourself a temporary ally. He owns the narrative, learn from it, IF you can. The anger is visceral, at this point. If Trump isn't polished enough, tough.

Those who underestimate him do so at their own peril.

Trump just wants power in Washington. He sees an opening with the base and is taking it. The GOP leadership has done everything in its power to alienate and dispirit the base, so I welcome Trump. He is looking to be a king maker and has alienated the left for at least the 2016 cycle. He has earned as much of my trust as Boehner or McConnell. Its an election year, lighten up.

Another side of Trump - serious and committed:
Watch the first 8 minutes - if not the entire thing . . .

Donald Trump has conviction and intensity.
Perhaps the buffoon side of his persona will take a backseat to the principled, courageous, confident leader.