THE $400 COLLEGE TEXTBOOK IS HERE: Thanks, Government Intervention into Student Loans and Higher Education!

A new milestone must have been established recently – we’re now officially in a new era of the $400 new college textbook and the $300 used college textbook, see accompanying graphic showing the top 15 most expensive textbooks at the University of Michigan-Flint based on a new unpublished report by Matthew Wolverton, an electronic resource management librarian at the Thompson Library (UM-Flint’s library). The graphic below shows the most expensive college textbooks by discipline at UM-Flint, based on the average price of new textbooks for each discipline in winter 2015 semester. 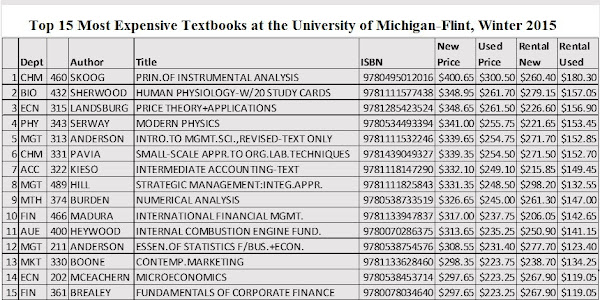 For business students taking five classes per semester and paying an average of $250 per textbook, their textbook bill would be $2,500 per year and $10,000 over four years! Of course, those students would be taking courses in non-business disciplines where the average textbook price is lower, but even at an average price of $200 per new textbook, students could be facing costs as high as $8,000 over four years. And even though renting textbooks is a less expensive option compared to purchasing books, rental costs per semester are running above $200 per new book and well above $100 per used textbook (and as high as $180), see top graphic above. Even if students could rent used textbooks for all of their college classes at $100 per course (which is probably on the low side), that would still amount to $1,000 per year (for ten classes) and $4,000 over four years (for 40 classes).

The graph below shows the historical increase in college textbooks (981%) between 1978 and 2014 in comparison to increases in the overall CPI (262%), the CPI for medical care (604%), and the median sales price for new homes (408%) over that 37-year period. Textbook prices seem like they are clearly on an unsustainable trajectory, especially in the face of new low-cost alternatives as discussed below. 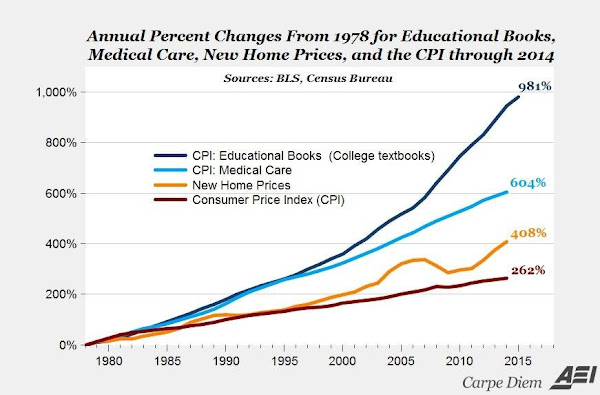 And just in case the rise in college textbook prices could be blamed on the increasing costs of publishing books in general, the chart below clearly shows that that’s not the case – the CPI for recreational books has been falling relative to the overall CPI since 1998, while the CPI for college textbooks has risen 3.5 times more than the overall CPI. 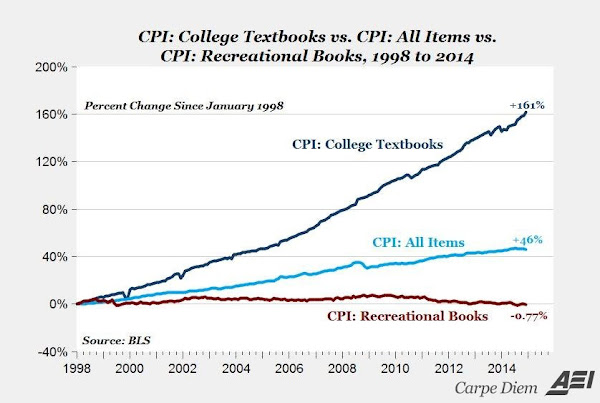 Bottom Line: The astronomical rise in the price of college textbooks is part of the unsustainable “higher education bubble,” which now even has its own Wikipedia listing here, and which Glenn Reynolds writes about in his 2012 book “The Higher Education Bubble,” summarized below:

America is facing a higher education bubble. Like the housing bubble, it is the product of cheap credit coupled with popular expectations of ever-increasing returns on investment, and as with housing prices, the cheap credit has caused college tuition to vastly outpace inflation and family incomes. College tuition payments have rapidly risen far faster (tuition and fees up 440+% from 1982 – 2007), vs. cost of living increases of 106% and family income growth of 147% during the same period, while the rate of return for a college degree is decreasing. Now this bubble is bursting.

Glenn Harlan Reynolds explains the causes and effects of this bubble and the steps colleges and universities must take to ensure their survival. Many graduates are unable to secure employment sufficient to pay off their loans. Already we have about $1 trillion in outstanding student loans, many in default (payments are being made on just 38% of the balances, down from 46% five years ago), and they can’t be discharged through bankruptcy. As students become less willing to incur debt for education, colleges and universities will have to adapt to a new world of cost pressures and declining public support.

As far as college textbooks, the new era of $400 textbooks seems to be clearly unsustainable in the face of a growing number of competitive, low-cost alternatives like free online textbooks from Open Stax College (about $40 for a printed version) and Boundless ($30 online textbooks in 25 subjects). Here’s my economic forecast for the college textbook market: Expect continued and very strong hurricane-strength gales of Schumpeterian forces, with a high likelihood of creative destruction and market disruption for traditional textbook publishers selling $300-400 college textbooks, accompanied by huge tsunami-level tidal waves of increased consumer surplus for college students in the future.

Find out more about the American Enterprise Institute by clicking here.

The fault is,quite clearly, government intervention. Once government gets out of the business of sustaining these higher costs for higher education, colleges will be forced to become more cost conscious and will be required to respond to general market forces which will drive down college costs. Of course this will never happen as long as the left can see a tremendous voting block in the owners of these student loans and a much smaller--but still consistent--voter block in college teachers who expect their salaries to match those in the business sector thanks to their progressive friends in government. Ever wonder why you don't see "free college" here in the U.S. as you do in Europe? Give this away free and you have a voter for four or eight years until that voter starts to pay taxes on a regular basis and realizes her or his hard earned money is going to pay for others to attend "free" college. This is not a bubble but rather a massive weight hanging around the necks of the American people which will only get bigger and heavier as more illegal immigrants demand a college education. The interesting times in how we approach this are just beginning!