DHS Chief spits on Congress, says he will refuse to obey immigration laws

Jeh Johnson warned Congress not to pass any laws to stop sanctuary cities. He also made it clear he won’t use the tools available to him to return criminals from countries who don’t want them back. 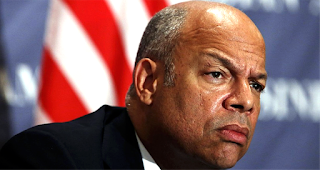 It’s not just hardworking men and women crossing the southwest border, but drugs, weapons, victims of human trafficking and people with terrorism ties, as well. The border is not secure and we don’t have a southern border, according to testimony in March of this year by border agent Chris Cabrera.

Jeh Johnson was asked about it on Tuesday and evaded the questions, answering with diversionary responses. Johnson did say he does not want to see nor does he want to enforce any law against sanctuary cities. Nor will he use the powers he has as DHS Chief against countries who refuse to repatriate illegal aliens from their country. He will talk with them instead.

ICE is releasing hardened illegal alien criminals to sanctuary cities, knowing the city won’t cooperate, knowing they don’t honor detainers. Jeh Johnson agreed the practice “doesn’t make sense” and “there should be some discretion built in.” However, he will not support federal law to force sanctuary cities into compliance with federal law.

When asked about municipalities that refuse to cooperate, Johnson said he will “evaluate” and “build in some discrimination.”

Johnson warned Congress against trying to pass laws forcing cooperation from sanctuary cities, saying it could conflict with the Constitution, and it won’t win over the hearts of reluctant communities.

“My hope is that jurisdictions like San Francisco County will cooperate with our new [Priority Enforcement] program,” he told the House Judiciary Committee. “I’m making the rounds with a lot of jurisdictions.

Johnson claims he has a “tremendous backlog” and has to “prioritize” the worst and most recent entrants. Unless the individuals commit a serious crime in this country, they will not be deported and even in some of those cases, they have not been deported.

A Homeland Security panel reported that at most, 35% to 40% of illegal aliens are stopped at the border and that number is far lower for drug smugglers “who are far more adept at eluding capture.”

In testimony before the Senate Homeland Security and Government Affairs Committee in March, Border Patrol agent Chris Cabrera in the Rio Grande Valley indicated that nearly 6 out of 10 illegal aliens cross into the United States without being apprehended.

“Ask any line Agent in the field and he or she will tell you that at best we apprehend 35-40% of the illegal immigrants attempting to cross,” Cabrera said, reading from a written testimony. “This number is even lower for drug smugglers who are much more adept at eluding capture.”

Cabrera went on to testify that that his fellow agents “face retribution” from their superiors for reporting illegal alien groups larger than 20.

“Agents who repeatedly report groups larger than 20 face retribution. Management will either take them out of the field and assign them to processing detainees at the station or assign them to a fixed position in low volume areas as punishment,” Cabrera told lawmakers. “Needless to say Agents got the message and now stay below this 20 person threshold no matter the actual size of the group.” [It’s being done to fudge statistics]


Cabrera also noted that the Customs and Border Protection (CBP) agency, a component of the Department of Homeland Security (DHS), is manipulating statistics and misleading the American people about security along the U.S.-Mexico border.

Half of the numbers are being counted are numbers that wouldn’t normally wouldn’t be counted. They are people caught at the border and sent back, previously referred to as “removals.”

When Jeff Sessions asked Jeh Johnson about it on Tuesday, he said “I’ve looked into It. I don’t have a specific answer”, adding that he thinks “6 out of 10 is too high an estimate”, after which he said he meets with border agents and isn’t interested in intermediaries, discounting the testimony of agents in March.

Johnson will not institute a federal requirement demanding sanctuary cities follow the law.

In 2012, John Morton, then-director of ICE, told Congress he was pushing within the administration to punish sanctuary cities, but signaled the Justice Department was blocking that.

Mr. Morton at the time said he’d fight to cut off funding for sanctuary cities.

ICE Director Sara R. Saldano was asked about making it mandatory for sanctuary cities to respond to detainers earlier this year and she said “Thank you, Amen, yes.” She was then “counseled” and issued a retraction the next day.

Johnson was asked about it Tuesday and said she issued a retraction based on her own views.

Sen Sessions asked about countries who won’t take back their illegal aliens, Communist China being one of the worst offenders. He said there’s a “campaign” to get them to cooperate. He won’t suspend immigration from these countries to force the issue, he will continue to talk to them.

The effective 287G “secure communities program” has been dismantled because amnesty advocates oppose it. Johnson was asked about it by Senator Sessions but said the biggest problem with the program is sanctuary cities wouldn’t cooperate. That’s why they ended it!

Instead of ordering them to obey the law, they decided to disband the program and came up with the new program, “PriorityEnforcement” to try to get cooperation.

On Morning Joe, Donald Trump was asked about who his sources were on the border as he decried the lack of border enforcement to which he responded he would give up his sources when they give up theirs. He added, “and if you speak to the border guards, who I’ve spoke to many of, if you speak to border guards, and these guys are terrific, they’re almost crying, they’ve almost got tears in their eyes when they explain that they’re not allowed to do their job…”

Trump has been excoriated for his comments and Paul Krugman said Trump is “a Belligerent, Loudmouth Racist with Not an Ounce of Compassion”, later adding that it plays into the views of Conservatives who are all bigots.

This is how any effort to stop open borders and to end sanctuary cities will go.

If DHS is incapable, or refuses to DO THEIR JOB, which is Security of the Homeland, why do they exist?

It's way past time for the Congress (repubics) to grow a pair and start upholding the rule of law. It's obvious they have taken a hands off approach with the president, but it's way past time that they "impeach" someone....Johnson would be a good start.

Sounds like this needs to be reported to the Judge that stopped the amnesty in Feb. and has now given Obama and Jeh just a few weeks to get back all of the 2000-3000 forms that they passed out. Maybe he would see things more clearly than Jeh does...