In the wake of the Obama administration scandal that saw the IRS illegally targeting conservatives and pro-Israel groups for daring to oppose Democrat policies, little has been done. The administration appears to be in full cover-up mode, with "crashed" hard-drives, missing emails, and lost backup tapes.

Hoping to jumpstart scrutiny of the IRS's plainly illegal activities, House representatives Jim Jordan and Ron Desantis offer a powerful argument that IRS chief John Koskinen should be immediately terminated by the President. And, if Mr. Obama refuses, that Congress should impeach the head of the troubled agency. Writing at the Wall Street Journal, Jordan and Desantis offer five clear reasons for their recommendation (emphases mine): 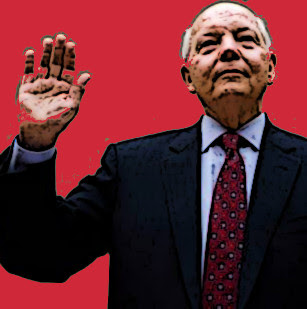 • Destruction of evidence. Lois Lerner, at the time the director of the IRS’s exempt-organizations unit, invoked the Fifth Amendment on May 22, 2013, when appearing before Congress; her refusal to testify put a premium on obtaining and reviewing her email communications. On the same day the IRS’s chief technology officer issued a preservation order that instructed IRS employees “not to destroy/wipe/reuse any of the existing backup tapes for email, or archiving of other information from IRS personal computers.”

Several weeks later, on Aug. 2, the House Oversight Committee issued its first subpoena for IRS documents, including all of Ms. Lerner’s emails. On Feb. 2, 2014, Kate Duval, the IRS commissioner’s counsel, identified a gap in the Lerner emails that were being collected. Days later, Ms. Duval learned that the gap had been caused in 2011 when the hard drive of Ms. Lerner’s computer crashed.

Despite all this—an internal IRS preservation order, a congressional subpoena, and knowledge about Ms. Lerner’s hard-drive and email problems—the Treasury inspector general for tax administration discovered that the agency on March 4, 2014, erased 422 backup tapes containing as many as 24,000 emails. (Congress learned of the discovery only last month.)

Ms. Duval has since left the IRS and now works at the State Department, where she is responsible for vetting Hillary Clinton’s emails sought by congressional investigations of the Benghazi attacks.

• Failure to inform Congress. Mr. Koskinen was made aware of the problems associated with Ms. Lerner’s emails the same month Ms. Duval discovered the gap. Yet the IRS withheld the information from Congress for four months, until June 13, 2014, when the agency used a Friday news dump to admit—on page seven of the third attachment to a letter sent to the Senate Finance Committee—that it had lost many of Ms. Lerner’s emails.

During that four-month delay, Mr. Koskinen testified before Congress under oath four times. On March 26, 2014, he appeared before the Oversight Committee and pledged that the IRS would produce all of Ms. Lerner’s emails, not mentioning that the IRS already knew of the problems with her emails and hard drive. Mr. Koskinen deliberately kept Congress in the dark. Based on testimony received by the committee, we now know that the IRS appears to have spent the four months working with the Obama administration to fine-tune talking points to mitigate the fallout.

• False testimony before Congress. Mr. Koskinen made statements to Congress that were categorically false. Of the more than 1,000 computer backup tapes discovered by the IRS inspector general, approximately 700 hadn’t been erased and contained relevant information. But Mr. Koskinen testified he had “confirmed” that all of the tapes were unrecoverable.

He also said: “We’ve gone to great lengths, spent a significant amount of money trying to make sure that there is no email that is required that has not been produced.” In reality, the inspector general found that Mr. Koskinen’s team failed to search several potential sources for Ms. Lerner’s emails, including the email server, her and the Martinsburg, W.Va., storage facility that housed the backup tapes.

The 700 intact backup tapes the inspector general recovered were found within 15 days of the IRS’s informing Congress that they were not recoverable. Employees from the inspector general’s office simply drove to Martinsburg and asked for the tapes. It turns out that the IRS had never even asked whether the tapes existed.

Three weeks after the 422 other backup tapes were destroyed by the IRS, Mr. Koskinen told the committee that he would produce “all” Lerner documents. This statement was clearly false—you can’t give Congress “all” of the material if you know that you have already destroyed some of it.

• Failure to correct the record. After his false statements to Congress under oath, Mr. Koskinen refused to amend them when given the opportunity at a public hearing earlier this year. If a lawyer makes a false statement to a court, he has a duty to correct it. Civil officers like Commissioner Koskinen have a duty to the American people to revise their testimony when it contains inaccuracies.

• Failure to reform the IRS to protect First Amendment rights. Mr. Koskinen hasn’t acted on the president’s May 2013 promise to “put in place new safeguards to make sure this kind of behavior cannot happen again.” A Government Accountability Office report released last week found that the IRS continues to lack the controls necessary to prevent unfair treatment of nonprofit groups on the basis of an “organization’s religious, educational, political, or other views.” In other words, the targeting of conservative groups may very well continue.

The pair of representatives end their piece with a mocking turn of phrase.

Mr. President, it’s time for Commissioner Koskinen to go. If you don’t act, we will.

Strong words, Messrs. Jordan and Desantis. And, given the track record of Johnny *Hic* Boehner, I ain't holding my breath.

Sure, but dump this guy first.