'Activist' sentenced to prison, but not before endorsing Obama

A Muslim activist and frequent critic of the Los Angeles police was sentenced to four years in prison after pleading guilty to trying to bribe a witness in a criminal case involving his daughter. The activist, Najee Ali, 45, was sentenced Monday. A two-year sentence was doubled because of a robbery conviction in 1992, said Sandi Gibbons, a spokeswoman for the Los Angeles County district attorney. Mr. Ali was a gang member before converting to Islam and founding the group Project Islamic Hope...

The Project Islamic HOPE website features a photo of Barack Obama with Najee Ali and a ringing endorsement of "change we can believe in". 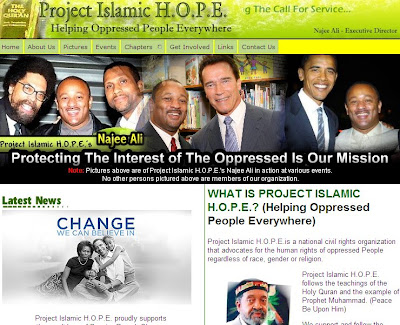 Somehow I don't think this is helping.
at 6:39 AM
Email ThisBlogThis!Share to TwitterShare to FacebookShare to Pinterest
Labels: extremism, Obama