The LA Times reports that Denver’s homeless are getting free haircuts to look good for Obama and the Democratic National Convention (via LGF).

According to Rick Sallinger of the CBS TV station, Denver Human Services has been handing out coupons for free homeless haircuts... The idea was to make the homeless feel better about themselves. And maybe then they’d get jobs or something. 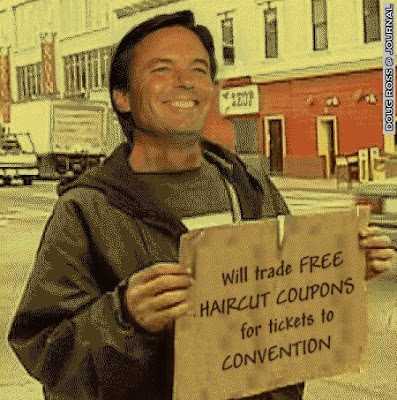 Rusty Johnson told Rick he hadn’t had a haircut in three or four months and, frankly, didn’t much care about the Democrats caring about his appearance. “I just want to look good and feel good for myself,” he said.

There's a John Edwards joke lurking somewhere in that story.
at 6:30 PM
Email ThisBlogThis!Share to TwitterShare to FacebookShare to Pinterest
Labels: Democrats, Edwards