If this is a troll, he deserves a Trollie Award. 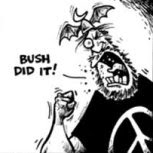 I am a very ardent supporter of Obama. I heard and read his remarks about not needing to drill for oil if we all “inflate our tires and tune-up or cars”.

I went to the GM dealer where I bough my 2005 Chevy Cobalt and was told that it can not be tuned-up!!! They said it was controlled by a computer, that would send a “OBD code” and light the “check engine light” if it had a problem or was out of spec. What is this, they said I need only oil changes? The spark plugs are good for 100,000 miles.

I now know that GM and Ford are in the pockets of the Republicans. Why would one of the smartest people in the world (Obama) say to tune-up my car, but the dealer says it is run by a computer and cannot tuned-up?? (My dad used to time and tune the fuel system on our 1966 Ford all the time)

I am the only Democrat that drives an American car; all my friends drive Toyotas and Hondas. Now I know why. I am going to the Toyota dealer on Monday to trade in my GM for a Toyota. The Republicans all drive Fords and GM’s. Look at George W Bush, he drives a Ford F250, his wife drives a Lincoln, and his daughters drive Fords.

Tuning-up my car to eliminate the need for foreign oil is funny? Being Green and saving the worlds eco-systems is funny? What's in you [sic] Kool Aid?

Obama said by inflating our tires and tuning-up our cars, we will not need to drill for oil. Republicans just do not get it. Go ahead and drive you [sic] Gas Guzzling American Car, I will have New Toyota Next Week! No more of the Republican indoctrination “Buy American for me”. I just made an appointment with the Toyota Dealer on Monday! GO OBAMA!!!

These guys are frickin' awesome!

Update: Argh! We have a new winner:

Who really cares if Barack Obama is a communist or socialist? Compared to the last 7 long years of having this idiotic moronic bloodthirsty murderous corrupt pathologically-lying sociopathic demonic fascist slimeball known as Dumbya in the White House, America would be well served to have a large amount of corrective action put in place by a communist or socialist. The simple fact is that President Cheney and his little dummy have easily been the worst leaders this country has ever had, and certainly ever will (arguable the worst in world history). I mean they even make Adolph Hitler look like a great guy. At least Hitler took care of his own people. You can’t even say that about Dictator Bush. I doubt you’ll ever find anyone more universally despised across the universe than George W. Bush. He has become so mentally deranged that today he even said we’re not in a recession...