Actual photograph of moonbat in the wild


Stuck in traffic today, I was lodged behind an Infiniti QX56 sporting an Obama sticker. 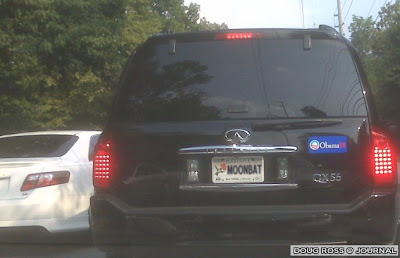 The actual reported mileage of a QX56 is between 9 and 11 miles-per-gallon (city).

If Obama's elected, I wonder how much this rocket scientist is willing to pay for gas (since Obama hates American-made oil)? Though I'm sure the mileage is appreciably higher if the tires are properly inflated.

Note: Not the real license plate, though I hear that's the term they prefer.
at 9:30 PM
Email ThisBlogThis!Share to TwitterShare to FacebookShare to Pinterest
Labels: Democrats, Energy, Obama