After the Warren Forum discussion on faith and values, a tacit admission that Barack Obama lost decisively came in the form of wailing and gnashing of teeth.

[Warren] had to ask McCain [additional] questions because McCain answered his questions a lot more briefly and succinctly than did Obama... it was so bad for Obama that the kook fringe began a drumbeat Saturday night of accusing McCain of cheating! Now, McCain did not cheat. McCain was driving to the event when Obama was on, and when he got there, he was put in a secure "green-room". The rule was that the guy that went second was not allowed to hear the answers of the guy who went first, and McCain didn't. 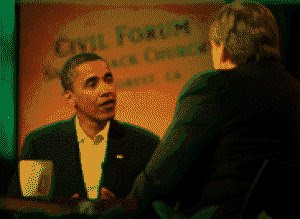 So the Obama disinformation about McCain hearing the interview, I mean, it's priceless. We've got this little man-child that is being called The Messiah. He's got this deeply ingrained sense of entitlement, and when it doesn't go his way, it's just cry-in-the-sandbox time.

That's right. Obama's campaign and its public relations arm, the mainstream media, have accused John McCain of cheating. That's the same John McCain who has never taken an earmark and has likewise never been accused of dishonest behavior like, say, plagiarism.

He insulted Clarence Thomas... When he was asked about Clarence Thomas, "Well, I don't think he has the right exper..." He caught himself and said he wasn't qualified at the time he was elevated to that position -- and here's a guy who's been to Yale, a guy who's been to Holy Cross, who spent a year on the DC Circuit Court of Appeals. He worked for Ashcroft as assistant attorney general in the state of Missouri, and Obama is what? A street agitator with 140 days in the Senate, and Obama claims that Clarence Thomas is unqualified?


By any reasonable measure, I'd say Thomas is a hell of a lot better prepared to be commander-in-chief than Obama.

Linked by: Gateway Pundit and Newsbusters. Thanks!
at 8:22 PM
Email ThisBlogThis!Share to TwitterShare to FacebookShare to Pinterest
Labels: Democrats, McCain, MSM, Obama