The pastor should have considered himself fortunate to be on the same stage as Sen. Obama. Not once di [sic] the pastor ask Sen. Obama if he was comfortable and if he would like a better chair; such rudenes [sic]. You can be sure that pastor Wright would have been more curtious [sic] towards Sen. Obama and more agressively interrogative of Sen. McCain. 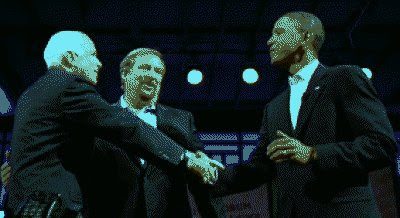 The only tide there will be is if Sen. Obama is denied his POTUS, and that will be a crimson tide on the streets of america[.]

It's hard to imagine a more warm and inclusive party than the modern Democratic Party.