'Wake up and prepare for the war'


IOL (South Africa) reports that Al Qaeda's North African wing has issued a call for 'holy war' in Mauritania. The statement comes on the heels of a military coup that overthrew the government led by President Abdallahi.

"Raise the banner of jihad and let us bleed and have our limbs severed until we bring back a caliphate styled along the lines of the Prophet's way," the leader of al-Qaeda in the Islamic Maghreb, Abu Mus'ab Abd el-Wadoud, said in a statement posted on the Internet on Tuesday. 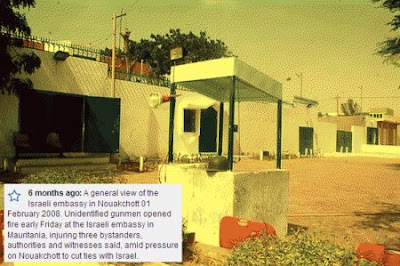 Abd el-Wadoud said the soldiers who toppled President Sidi Mohamed Ould Cheikh Abdallahi in the northwestern African state last week were probably acting upon a green light from "infidel states; America, France and Israel". "Wake up and prepare for the war."

Under the deposed president, Mauritania, which spans Arab and black Africa, was an ally of the United States in its war against al-Qaeda... An al-Qaeda attack on the Israeli embassy in February highlighted Mauritania's status as one of the few Arab countries with diplomatic ties with the Jewish state.

Tuesday's web statement condemned what it called "apostate regimes ruling the Islamic Maghreb ... that enslave their people (and) have always raised the banner of democracy in their fight against Islam, while people see that most of them assumed power through military coups," el-Wadoud said.

The United Nations issued a strongly-worded memo condemning the coup.

In related news, the AP reports that twin bombings in Algeria killed 11 people a day after a suicide bomber killed 43.

No group has claimed responsibility for either attack. The bombings, however, follow a string of violent attacks claimed by al Qaeda in the Islamic Maghreb. The extremist group started off as a local insurgency movement but has more recently tied up with Osama bin Laden's global terror network, adopting the al Qaeda name. 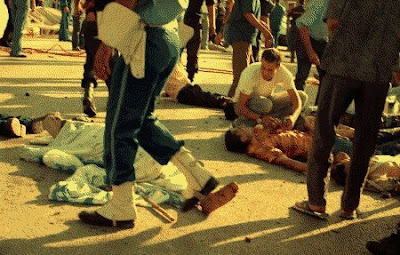 The group has claimed responsibility for a series of suicide bombings and other attacks against government and Western interests in Algeria. In December, near-simultaneous car bombs exploded outside United Nations offices and a government building in Algiers. The death toll in that attack was 41, including 17 U.N. workers. The group also claimed responsibility this month for a suicide attack on a police station in northern Algeria.

I believe that militant Quakers are likely behind this series of attacks.

Photos: Getty Images/AFP and ABC.Net Australia/AFP.
at 6:30 AM
Email ThisBlogThis!Share to TwitterShare to FacebookShare to Pinterest
Labels: extremism, War