Parts of the interview faded out on my computer, but I'm pretty sure this transcript is accurate.

Q: The born-alive infant protection act, we get a lot of emails about it.

A: Let me clarify this right now. My opponents have not been telling the truth. And I hate to say that people are lying, but they're lying. I have said repeatedly that I would have fully supported the federal bill that everybody supported... That was not the bill that was presented at the state level, which would have undermined Roe v. Wade.

Q: Well, our researchers discovered this document from March 2003, which shows the state bill was amended to be identical to the federal bill... and that you then voted to kill the amended bill, which went down to defeat 6-4 with all of the Democrats voting to kill it.

Q; We've noticed that when you resort to the phrase "I have said repeatedly" that you're generally getting ready to change positions, waffle, fib... a few examples: the death penalty for raping a child, on supporting the surge, on the born-alive infant protection act, on respecting Hillary Clinton, on moving troops out of Iraq in 16 months, on his campaign bringing people together, on whether he respects Sen. McCain's service to his country, on accepting $1.5 million from lobbyists, well... you get the picture...

A: I have consistently stated that my glib and forthright patter should not be judged for its veracity, but its tone and tenor.

Q: Let's switch to spirituality for a moment. Your controversial church -- Trinity United -- espouses a "Black Liberation Theology", which "refuses to accept a God who is not identified totally with the goals of the black community. If God is not for us and against white people, then he is a murderer, and we had better kill him. The task of black theology is to kill Gods who do not belong to the black community ... Black theology will accept only the love of God which participates in the destruction of the white enemy.. [the] power of black people to destroy their oppressors here and now by any means at their disposal." Many theologians believe that, beyond a non-loving God, the church is nothing more than a thinly disguised form of Marxism.

A: I have said repeated-- uhm, I have consistently stated that I never heard any of these divisive statements during my seventeen years as a congregant of Trinity. I could very well have been asleep during all of the sermons, but I know for certain that none of these hateful remarks ever penetrated my cranium.

Q: One last question: what do you say to those promoting the rumors that you're the anti-Christ or a Messianic, apocalyptic figure? 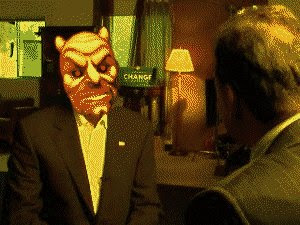 A: Absolutely not true, Pat. I have, on occasion, been consumed by evil spirits such as this one -- Iblis, the thrice-damned, a second-tier demon who wanders the Earth seeking opportunities to subvert Heaven's work. But those instances are few and far between and would never, ever cloud my judgment as commander-in-chief.

at 9:12 PM
Email ThisBlogThis!Share to TwitterShare to FacebookShare to Pinterest
Labels: extremism, Obama