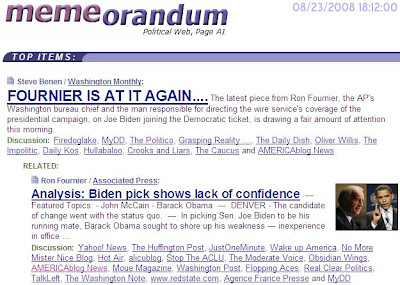 The barking moonbatsphere erupted with the expected indignation. How dare the mainstream media -- and the AP no less? -- criticize a major Democratic decision. Most observers believe that such a thing hadn't occurred since '63 with JFK's Bay of Pigs debacle. The wanknuts' reactions ranged from high-pitched shrieking to overt threats of personal harm.

Washington Monthly: "[His] objectivity covering the presidential race continues to look shaky... We learned not too long ago that Fournier exchanged emails with Karl Rove about Pat Tillman [and] Fournier was also one of the journalists who, at a gathering of the nation's newspaper editors, extended McCain a box of his favorite donuts [with sprinkles]." (Jeez, sprinkles? That's really crossing the line!)

FireDogLake: "ACTION: Tell AP To Remove Ron Fournier From the Presidential Beat. As recently as last year, Ron Fournier considered working for the McCain campaign. Instead he took a job as Washington bureau chief for the AP, but it looks like he's still working for McCain... It's time to crank out [letters to the editor] again. Ron Fournier must be taken off the Presidential beat. He's got an obvious conflict-of-interest." (As opposed to Barack Obama's millions in earmarks to his wife's hospital, which coincidentally tripled her salary.)

The ill-named Grasping Reality: "Why oh why can't we have a better press corps? ...Don't trust them. Don't patronize their advertisers. Don't believe them. Listen, instead, to people with substantive expertise and knowledge trying to convey that knowledge rather than the ignorant trying to score points with their owners, editors, and sources." (Like... 'Grasping Reality'?)

MyDD: "If pure Republican spin and McCain talking points are what we are to expect out of the AP under Fournier, it's going to be a long hard slog full of truth squading between now and election day." (Because that's what the AP is known for -- pure Republican spin.)

The well nigh unreadable "AMERICAblog": "I know that the Associated Press considers it a point of honor to promote someone whenever they do something incredibly biased and their impartiality is seriously compromised, but after their top presidential reporter, Ron Fournier, interviewed for a job with the McCain presidential campaign, it's simply abominable that AP would keep him on the presidential beat.." (Whew. Take a breath, Sparky. I haven't seen so many commas since ee cummings retired.)
at 6:30 PM
Email ThisBlogThis!Share to TwitterShare to FacebookShare to Pinterest
Labels: Democrats, extremism, MSM