The Los Angeles Times reports that a new documentary depicts how the Clintons blocked the release of the ABC docudrama Path to 9/11. 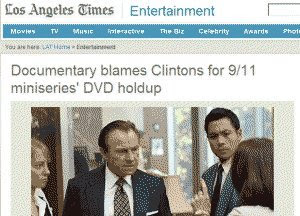 ...a new documentary called "Blocking the Path to 9/11," to be given a screening tonight, makes the case that former President Bill Clinton and Sen. Hillary Rodham Clinton have pressured television and studio executives into quashing the DVD release of ABC's 2006 miniseries “The Path to 9/11." The privately financed documentary argues that the Clintons, who decried the original miniseries as a right-wing hatchet job, are out to salvage their political influence and legacy at the expense of free expression...

...Even before its network broadcast, "The Path to 9/11" sparked fierce opposition from Democratic leaders, who called on Disney, which owns ABC, to cancel the program. While those attempts eventually failed, ABC conceded to last-minute edits to the $40-million, five-hour miniseries, which aired over two nights.

The miniseries, written by Cyrus Nowrasteh, offered a fictionalized account of the government's bureaucratic missteps that led to the terrorist attacks on the World Trade Center in 2001. The series, which earned seven Emmy nominations and drew a combined audience of about 25 million viewers, was seen as being especially critical of the Clinton administration for bungling efforts to capture or kill Osama bin Laden.

In the months leading up to the 2004 Presidential Election, a major motion picture was released. Fahrenheit 9/11, a movie written and directed by Michael Moore, pilloried the Bush administration for its "unjust" actions in pursuing the war on terror.

While portrayed as a documentary, critics pointed out that Moore's movie contained more than 50 major inaccuracies. Democrat Ed Koch called the film, "propaganda" and Slate's Jack Shafer said, "no court would be inclined to find in Moore's favor if a critic accused him of lying once or twice or 12 times in Fahrenheit 9/11."

Despite all of the criticism, Moore was feted at Cannes and other major film festivals.

Moore was also honored with a Presidential Box seat at the Democratic National Convention along with ex-President Jimmy Carter.

On August 21, 2006, ABC released the synopsis of its mini-series, "The Path to 9/11." The docu-drama is a "dramatization is based on The 9/11 Commission Report and other published sources and personal interviews."

The film portrays the events leading up to 9/11 in a dramatized fashion. Scenes include "...a plan to capture bin Laden and bring him to the U.S. to face justice [that] is never approved for action... [later] the simultaneous bombings of two U.S. embassies... push the Administration to respond with an ineffective missile strike that some think merely elevates bin Laden's stature in the Muslim world."

In 2004, the Washington Times reported that the Clinton administration had four opportunities to kill or capture Bin Laden and failed to act each time.

According to the Times, Sandy Berger -- Clinton's national security adviser -- worried, "if the plans failed and al Qaeda launched a counterattack, 'we're blamed.'"

Berger later admitted to stealing and destroying Top Secret documents related to "the Administration['s] knowledge - and inaction - regarding al Qaeda presence in the U.S. in 1999 and 2000... stolen were crucial notes in the margins of these drafts which reveal the thinking and agendas of the Clinton Administration relating to the mounting terrorist threat."

Richard Miniter discloses the real reasons why Berger risked his career and reputation to steal the 9/11 documents. [Now Hillary] makes Berger one of her top three foreign policy advisers... and I have a few questions:

Did she bring him aboard to reward him for his criminal destruction of classified material? Or did she sign him up because of his stellar record in fighting bin Laden in the late 1990s? Bill Clinton's legacy and Hillary Clinton's hopes for the presidency rested on Berger's ability to purge the National Archives of the incriminating material.

In truth, the Clintons were unwilling to take any risks that would result in the capture or assassination of Bin Laden, presumably because it could have damaged their poll numbers.

Unembarrassed about these actions, Berger and other former administration officials have complained bitterly about ABC's film. Berger himself called one scene, "a total fabrication."

Democratic members of Congress have also requested the ABC alter or remove the film from distribution. The EIB Network reports that Democrats sent a, "...letter threatening ABC's license for their owned and operated television stations..."

The Democrats should be ashamed of themselves. But they won't be; and that's precisely why the party is coming apart at the seams. And the convention will demonstrate that in stark, ominous terms.
at 2:25 PM
Email ThisBlogThis!Share to TwitterShare to FacebookShare to Pinterest
Labels: Democrats, extremism, Hillary, War