George Hussein Onyango Obama living in a hut in a ramshackle town of Huruma on the outskirts of Nairobi... [he is] 26, the youngest of the presidential candidate's half-brothers, spoke for the first time about his life, which could not be more different than that of the Democratic contender. 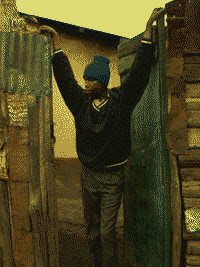 "No-one knows who I am," he told the magazine, before claiming: "I live here on less than a dollar a month."

According to Italy's Vanity Fair his two metre by three metre shack is decorated with football posters of the Italian football giants AC Milan and Inter, as well as a calendar showing exotic beaches of the world... ...he had a front page newspaper picture of his famous brother - born of the same father as him, Barack Hussein Obama, but to a different mother, named only as Jael.

...He has only met his famous older brother twice - once when he was just five and the last time in 2006 when Senator Obama was on a tour of East Africa and visited Nairobi... The Illinois senator mentions his brother in his autobiography, describing him in just one passing paragraph as a "beautiful boy with a rounded head".

No word on whether The Huffington Post or NPR will pursue this story with the fervor of their blockbuster scoop that revealed Cindy McCain's half-sister has been ignored by the family.