Motor Authority has pics and video of the 2010 Camaro

...Due to start production February 16th, 2009, the car is being marketed as a high-tech and efficient high-performance car targeted at sports enthusiasts with a mind to fuel consumption and style... Standard U.S.-market models include LS, LT and SS models. Rumors of a super-high performance Z28 model are still circulating, but so is talk that the car has already been killed due to tough CAFE standards. An RS visual package (pictured on the car below) will be available on LT and SS trim models. The package includes 20in wheels, HID headlamps with integrated halo rings, and a unique rear spoiler and tail lights. 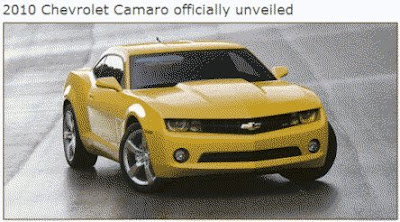 The transmissions available include the Hydra-Matic 6L50 six-speed auto for LS and LT trims and the Hyrda-Matic 6L80 for the SS - both autos have manual ‘tap-shift’ capability. Should you choose to row the cogs yourself, an Aysin-Warner AY6 six-speed manual is fitted in the LS and LT trims, with a Tremec TR6060 six-speed in the SS...

I'd have to see it in person, but it looks promising.
at 8:31 PM
Email ThisBlogThis!Share to TwitterShare to FacebookShare to Pinterest
Labels: Autos