Take away the teleprompter and simply wait a few seconds for the hilarious Obama hi-jinx to begin!

[China's] ports, their train systems, their airports are all vastly superior to ours now... if you're a corporation deciding where to do business, you're starting to think, 'Beijing looks like a pretty good option!' Why aren't we doing the same thing?

Uhm, because we're not a Communist dictatorship keeping the vast majority of its people living in rural areas on $10 a week? 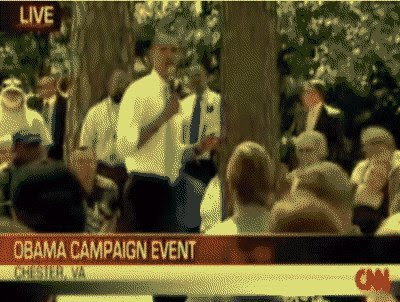 Why does Barack Obama hate America?

Barack Obama without a teleprompter is an accident waiting to happen. Sometimes he reveals his ignorance of history, sometimes he stumbles incoherently, and sometimes he blurts out what he really believes. That's what happened today when Obama tried to talk about Georgia, a topic that has embarrassed him more than once already, beginning when, in the first hours after the invasion, he parroted the Russian line.

Today Obama equated Russia's invasion of Georgia with our toppling of Saddam Hussein: “We’ve got to send a clear message to Russia and unify our allies,” Obama told a crowd of supporters in Virginia. “They can’t charge into other countries. Of course it helps if we are leading by example on that point.”

So our "charging into" Iraq-- with dozens of allies, supported by a U.N. resolution, as a last resort after six months of build-up and negotiations, to unseat one of the cruelest dictators of modern times who had twice invaded neighboring states, was in violation of more than a dozen U.N. resolutions and was responsible for the deaths of something like two million people, who was shooting at American aircraft and had tried to assassinate a former President of the United States, in Obama's childish mind, was just like Russia's "charging into" Georgia, which resembles Saddam's Iraq in no respect. And, of course, we invaded a horrifying charnel-house so as to establish a democracy, whereas Russia invaded a peaceful democracy that it wants to re-incorporate into its empire.

Is Obama an idiot? I don't think so, really. But one of the many problems with being a leftist is that it leads you to say lots of stupid things. Today, the Obama gaffe machine went into overdrive. By November, I suspect that most voters will have heard enough to know that Barack Obama is unqualified to be a middle-manager in a well-run company, let alone President of the United States.

In Britain it took as long to conduct a public inquiry into the proposed construction of Heathrow's Terminal Five as it took to build Beijing's new airport terminal from scratch.

There was no consultation with the public on the terminal. Nor was there any public debate about the construction of Beijing's third runway, notwithstanding the noise pollution already suffered by thousands of nearby residents.

Chinese official Xu Li said, Once a plan is made, it is executed. “Democracy”, she says, “sacrifices efficiency.”

For Beijing's airport expansion, 15 villages were flattened and 10,000 residents resettled. They were barred from unemployment benefits and other welfare privileges though their farmland had been grabbed. Officials threatened them with violence if they refused to leave.

The World Bank says that roads are sometimes built only to convert countryside into revenue-generating urban land. Combined with a lack of adequate public transport, Beijing's polluted air and congested streets, to which 1,000 cars are added daily, are evidence of the problem...