Yes, let's compare the record of Obama with that of Palin!


Who is the real reformer? Who brings real change? Review their respective careers and you quickly arrive at a single irrefutable answer.

In 2003, Alaska Governor Frank Murkowski appointed her to the state's Oil and Gas Conservation Commission. Bear in mind that Mr. Murkowski had already served as junior U.S. Senator from Alaska for 22 years. Mr. Murkowski was junior senator for so long because Senator Ted Stevens (who was recently indicted for corruption) had lifetime tenure in the senior post. 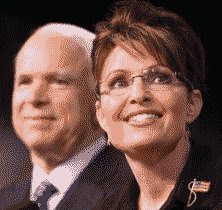 Shortly [thereafter], Mrs. Palin commenced an ethics probe of the state's Republican party chairman, Randy Ruedrich, involving conflicts of interest with oil companies. The probe resulted in a $12,000 fine for the party chair.

She crossed party lines in 2004 to join a Democratic representative's ethics complaint over an international trade deal against the Republican Attorney General Gregg Renkes, who had ties to the Murkowski machine. Mr. Renkes resigned.

In late 2005, Mrs. Palin announced her run for Governor before then-Governor Murkowski had announced his intention to stand for re-election. In a three-way primary, Mrs. Palin got 51% to Mr. Murkowski's 19%. At the center of this campaign was a debate over competing proposals to build a natural gas pipeline across Alaska.

These columns wrote about Gov. Murkowski's smashing defeat by Mrs. Palin, noting that his pipeline proposal had been tainted by reports of sweetheart deals with energy companies. The editorial ended: "If Republicans are run out of Congress in November, one big reason will be that, like Mr. Murkowski, they have become far more comfortable running the government than reforming it." That is what happened, as disgusted GOP voters turned away from their own party and ceded control of Congress to the Democrats.

Against the odds, Mrs. Palin won that 2006 election against the state's former Democratic governor Tony Knowles. Most recently, she promoted the effort of her GOP lieutenant governor to unseat U.S. Congressman Don Young, who with Senator Stevens created the earmark that sank the GOP, the notorious "bridge to nowhere."

...Governor Palin's credentials as an agent of reform exceed Barack Obama's. Mr. Obama rose through the Chicago Democratic machine without a peep of push-back. Alaska's politics are deeply inbred and backed by energy-industry money. Mr. Obama slid past the kind of forces that Mrs. Palin took head on. This is one reason her selection -- despite its campaign risks -- seems to have been so well received by Republicans yesterday. They are looking for a new generation of leaders.

Looking for a "tale of the tape"? Red State lines 'em up for easy comparison purposes.

Update: Not Ready '08 has the must-see video board.
at 9:30 AM
Email ThisBlogThis!Share to TwitterShare to FacebookShare to Pinterest
Labels: McCain, Palin