6'5" Usain Bolt made quite an impression on the track world with his easy victory in the Olympic 100-meter final.

The aptly named Bolt broke his own world record by finishing in 9.69 seconds, despite purposely slowing to celebrate in the final fourth of the race. 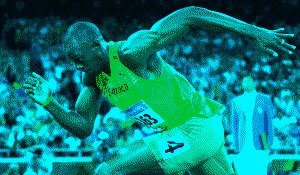 It is exceedingly difficult to imagine that Bolt could give Johnson's 12-year-old record of 19.32 seconds the same casual treatment in the final Wednesday. No one has seriously challenged Johnson's mark since he set it at the 1996 Olympics... For now, Bolt's personal best remains 19.67, but he clearly intends to beat that Wednesday...

More intriguing from a technical standpoint, there is the new paradigm theory, linked to Bolt's unusual 6-foot-5, or 1.96-meter, stature: three inches taller than Carl Lewis and two inches taller than Tommie Smith, the all-time greats to whom he is most often compared.

If NFL teams are looking for a Plaxico Burress-clone, they could do worse than start with Bolt.
at 7:23 PM
Email ThisBlogThis!Share to TwitterShare to FacebookShare to Pinterest
Labels: Sports