What Hillary did NOT say 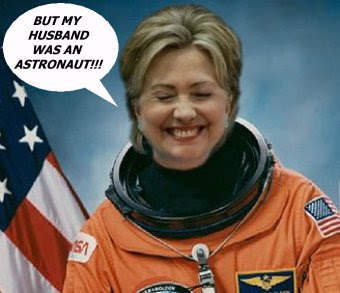 Hillary Clinton began her speech to the Democratic National Convention this evening by declaring that she was a "proud"...

...is there any other role in Hillary’s life that most "normal" people would express pride in fulfilling that Hillary skipped?

Exit Question: Can you blame her?

Note that her pride in America comes after that of being a Democrat... and Barack Obama comes in last.

"The funny thing is she’d be a nobody without Bill. That man deserves a cigar"

"I hope she at least took the time and effort to school Michelle Obama on the duties of a First Lady:
* Pushing socialist policies
* Lying for your cheating husband
* Hiding incriminating files
* Firing White House employees and replacing them with your old cronies
* Claiming your share of the Presidency (”We are the President!”)"

"I can’t listen to her at all. Her voice loosens my fillings."

"I thought Michelle was going to explode. She tried to look happy, but the dislike was apparent."

"Michelle always has that look on her face. It looks like she bit a bitter lemon."