It's come to this: Tide laundry detergent being used as currency in some U.S. neighborhoods

Didn't this happen in Zimbabwe just before their currency collapsed under a tidal wave of hyperinflation? 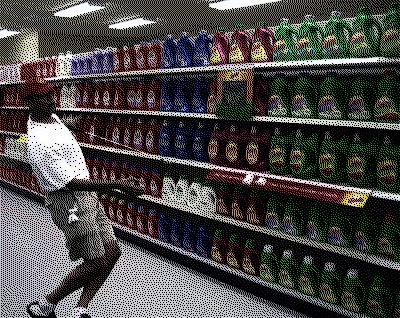 ...Theft of Tide detergent has become so rampant that some cities are setting up special task forces to stop it and retailers like CVS are taking special security precautions to lock down the liquid.

...Tide has become a form of currency on the streets. The retail price is steadily high -- roughly $10 to $20 a bottle -- and it's a staple in households across socioeconomic classes.

Tide can go for $5 to $10 a bottle on the black market, authorities say, and some thieves even resell it to stores.

"There's no serial numbers and it's impossible to track," said Detective Larry Patterson of the Somerset, Ky., Police Department, where authorities have seen a huge spike in Tide theft. "It's the item to steal."

To paraphrase Mark Steyn, when laundry detergent becomes a de facto currency, you're pretty much done for.

You feeling stimulated yet?

The begining of the Black Market. This is music to Obama's Marxist ears. A sign of his success. Every Third-World Banana Republic must have a black market - now we're getting our very own! Come to think of it this covers the redistribution angle as well.... Boy, these boys are doing a hell of a job destroying America. Hey -let's have a party!! I'll bring the Tide!

This is certainly a new twist on "laundering money".