AT LAST: DHS finally getting serious about the "pregnant women and kids with guns" threat

I refer, of course, to the vendor of shooting targets for the Department of Homeland Security and other federal agencies that has created a line of “non-traditional threat” targets that include pregnant women, children, mothers in playgrounds and elderly Americans. Seriously.

Finally, the DHS will put an end to the epidemic of seven-year olds and pregnant women shooting cops. The company says it's all about, uhm, realism.

The subjects in NMH targets were chosen in order to give officers the experience of dealing with deadly force shooting scenarios with subjects that are not the norm during training. I found while speaking with officers and trainers in the law enforcement community that there is a hesitation on the part of cops when deadly force is required on subjects with atypical age, frailty or condition (one officer explaining that he enlarged photos of his own kids to use as targets so that he would not be caught off guard with such a drastically new experience while on duty). 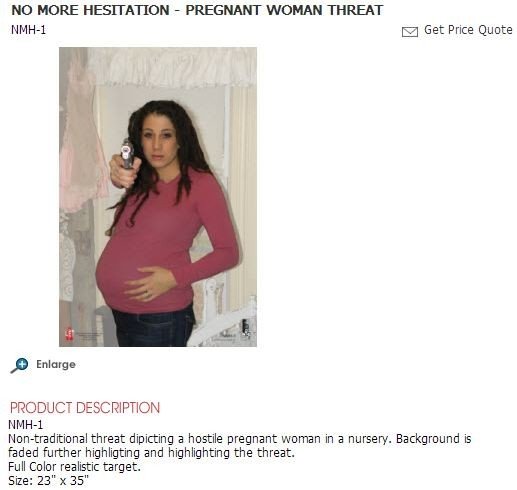 This hesitation time may be only seconds but that is not acceptable when officers are losing their lives in these same situations. 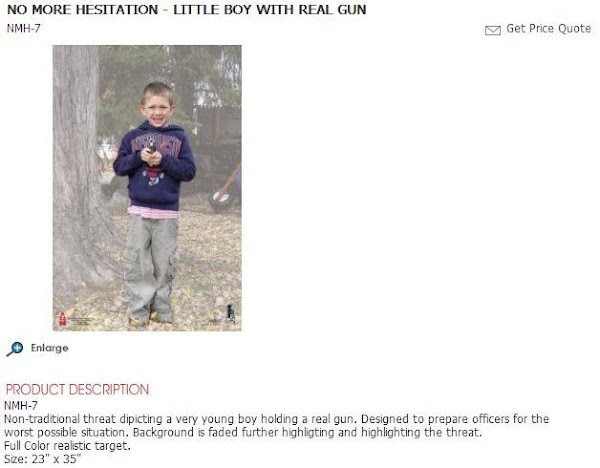 The goal of NMH is to break that stereotype on the range, regardless of how slim the chances are of encountering a real life scenario that involves a child, pregnant woman, etc. If that initial hesitation time can be cut down due to range experience, the officer and community are better served.

Because over and over again, history is replete with incidents of law enforcement officials being shot at by 7-year old kids and pregnant ladies.

With that as context, please consider the following news reports:

1. The Department of Homeland Security recently acquired 2 billion rounds of ammunition, which represents thousands of rounds per DHS employee.

2. Newly released drone records have revealed extensive military flights inside the U.S.; police departments and federal agencies plan to have as many as 30,000 drones monitoring Americans within the next seven years.

3. When Can the U.S. Kill Americans? The White House Won't Say -- and Won't Even Tell Congress; President Obama's successful efforts to renew and strengthen The Patriot Act under the NDAA means, according to the ACLU, American citizens may be subject to "indefinite military detention without charge or trial... for the first time in American history."

4. The FBI director said in March he'd have to check whether the president can assassinate citizens inside the U.S.. When questioned by Congress regarding a speech by Attorney General Holder, who offered his "legal justification for assassination", FBI Director Mueller was unable to say whether the president could unilaterally decide to assassinate U.S. citizens inside the borders of this country.

5. The DHS has specifically listed Americans who believe in "individual liberty" as potential terrorists. These "right-wing extremists" who insist in fidelity to the Constitution are, according to multiple studies funded by DHS, among the country's most dire terrorist threats. Not Al Qaeda, Hezbollah, Ansar al-Islam, Hamas, or Iran's Revolutionary Guards -- together responsible for tens of thousands of murders -- but "violent right-wing extremists" who believe in the principles of the nation's founding.

7. Police departments throughout the country are receiving tanks, humvees and drones from the Department of Defense, according to a WLS-TV (Chicago) I-Team investigation. "Short of a weapon of mass destruction, you can get any kind of military gear that's out there," the police chief of Benedectine University told WLS. "We chose firearms and a vehicle." WLS also reported rampant theft of military equipment, including body armor and night-vision goggles issued to the Chicago Police Department.

And now we can add:

8. The purchase of "non-traditional" shooting practice targets by the DHS, which include realistic images of kids, pregnant women and seniors.

You progressives starting to get the picture?

The one with a mother holding a baby.

Did Bush ever purchase the seemingly pregnant woman in a burka and the nine year old Hamas boy models? (we know jihadis love to use burkas)

I guess not; There would have been endless hearings and impeachment.

When people ask why didn't the people do something re: Lenin, Stalin,Hitler, Mao, etc., now we know.

It's right in their faces and they're telling who the targets are...